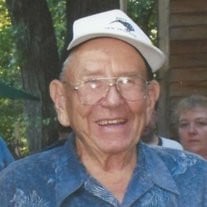 SOUTH HADLEY- William Franklin Sligo, 90, of South Hadley died Thursday, November 7, 2013 at Renaissance Manor on Cabot St., Holyoke. He was born February 22, 1923 in Holyoke, Ma the son of the late William C. and Rosa (Lippmann) Sligo. He was a graduate of South Hadley High School in 1940. A World War II veteran, he enlisted in the US Navy in 1942 and served four years in the Asiatic/Pacific with the 115th Bombing Squadron. He served as a tail and waist gunner on the PB4Y-1, the Navy�s version of the USAAF B-24 Liberator. He worked as a tool and die maker/machinist-first at Bemis & Call in Springfield and later retired from Sinclair Wire Works in Holyoke after 31 years. He was a past vice commander at the American Legion Post #260, where he was also manager of the Legion Club. William loved traveling with his wife and made a special trip to Washington honor flight in 2010 through Honor Flight of New England. He was an avid fisherman and loved boating especially on the �Puffin� in Niantic, CT for over 30 years. In addition to his parents, he was predeceased by a sister Ruth (Sligo) Roache Hunter and a granddaughter Lynn Sarah Saunders. He leaves his beloved wife of 66 years, Virginia (Stafford) Sligo; a daughter, Dale Saunders; his sons, William S. Sligo and his wife Robin; Richard R. Sligo and his wife Luann; his three grandsons, Bruce �Chip� Saunders, Chad Saunders, Shannon Sligo and six great grandchildren, Ethan, Ben, Luke and Brooke Saunders as well as Ryan and Hazel Sligo. Messier Funeral Home is in charge of the burial and all services will be private. Memorial donations may be made to the South Hadley Council on Aging, 45 Dayton St., So. Hadley, MA 01075 or The Dakin Pioneer Valley Humane Society, 171 Union St., Spfld, MA 01105 or the Salvation Army, 271 Appleton St., Holyoke, MA 01040.

The family of William Franklin Sligo created this Life Tributes page to make it easy to share your memories.

Send flowers to the Sligo family.