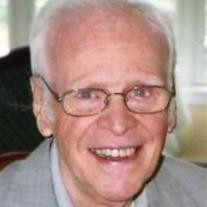 DR. THOMAS B EFFORD 1922 - 2010 Dr. Thomas B. Efford, 88, of Bayon Drive, S. Hadley, and more recently of Aubinwood Rd., Amherst was released from his physical body and reunited with the energy of pure love on 11/26/2010.Born in Boston in 1922, to Charlotte (Burridge) and Edward G. Efford, �Tom� attended local schools and Boston University. He received his Medical Degree from Boston University Medical School in 1947, following that time, he completed his internship at Lowell General Hospital from 1947-1948 and pursued a fellowship in his specialty area of radiology, at the Cleveland Clinic in Ohio, where he lived with his wife and three of his children from 1953-1956.His beloved wife Dorothy Marie Allen, predeceased him in November of 2006. Long time Holyoke residents, Tom and Dorothy �Dorey� made their home on Mountainview Dr. and later at Loomis Village in S. Hadley. He is survived by four children: Thomas D. Efford of Valrico, FL., Aimee J. Stewart of Valley Center San Diego, CA, Deborah M. Leonas of Amherst, MA, and Lori A. Efford of Holyoke, MA. In addition he is survived by eight grandchildren, two great grandchildren, as well as the Allen family of Springfield, MA. Tom served as a flight surgeon and aviation medical examiner, in Japan 1951-1953 and received Korean and United Nations Medals. Following his service in the US Air Force and the US Navy, he became a member of the radiology department of the (then) Holyoke Hospital from 1957-1991, serving as Chief of Radiology from 1981-1990. Tom enjoyed traveling extensively with his wife �Dorey�, they toured the world together throughout their marriage. Dorey�s favorite destination was the Hawaiian Islands; they both enjoyed relaxing beside the Pacific Ocean enormously. He also enjoyed spending time skiing, sailing, and fishing. He and Dorey built their summer home at Hammond Acres, MA, where Dorey and the children spent their summers, while Tom commuted to Holyoke Hospital. He joined his family there on his weekends �off�. He was dedicated to his patients and devoted to his wife and children; he will be deeply missed by his family and friends. A private memorial service will be held at the convenience of the family. There are no calling hours. Memorial contributions may be made to the American Cancer Society or to the charity of the donor�s choice. Please visit www.messierfuneralhome.com to offer sympathies or to share a story with Tom�s family.

The family of Dr Thomas B. Efford created this Life Tributes page to make it easy to share your memories.

Send flowers to the Efford family.