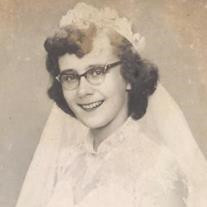 SOUTH HADLEY- Stella A. (Zielenski) Belisle, 78, of South Hadley died Thursday, August 13, 2015 at Willimansett Center West in Chicopee. She was born on April 26, 1937 in Easthampton, daughter of the late William and Stella (Marchewka) Zielenski and was educated in Easthampton Schools, graduating Valedictorian of her class in 1955. She was a longtime parish secretary at Immaculate Conception Church and retired in 2002 after 20 years of service. She also was the first Eucharistic minister at the parish, sang in the Choir and was involved in every aspect of the parish along with her family. She was recently predeceased by her husband, Gerard R. Belisle on July 27, 2015. Stella leaves behind five sisters and a brother, Marian and her husband Prentice Wheeler, Helen and her husband Charles Fedor, Katherine and her husband Floryan Walaczek and William Zielenski all of Easthampton. Rose and her husband Chester Wojtkiewlewicz of So. Deerfield, MA; Pricilla and her husband Chafik Behidj of San Ramon, CA. Stella also leaves her eight children, Christine A. Johnson of Springfield, Michael Belisle and his wife Suzanne of Centerville, OH; Dennis A. Belisle and his wife Kassandra of Bristol, CT; Daniel J. Belisle and his wife Janet of San Antonio, TX; Deborah J. Talbot and her husband Daniel of South Hadley; David P. Belisle and his wife Mary of Holyoke; Joseph A. Belisle and Robert J. Belisle of South Hadley; 10 grandchildren, 2 great grandchildren and several nieces and nephews. There are no calling hours. A funeral Mass will be celebrated at Immaculate Conception Church, 54 N. Summer St., Holyoke on Monday, August 17, 2015 at 9:30AM and be followed by the Rite of Committal in the chapel of the Massachusetts Veterans� Memorial Cemetery, Agawam. In lieu of flowers, memorial donations in Stella�s name may be made to Alzheimer�s Disease Assoc., 264 Cottage St., Spfld, MA 01104.

The family of Stella A. Belisle created this Life Tributes page to make it easy to share your memories.