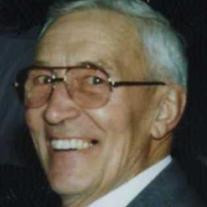 HOLYOKE � Roger J. Fortin, Sr., died peacefully on Friday, July 15, 2011, at his home. He was born in Highgate Spring, VT on April 10, 1923 to the late Alfred J. and Eleanor (Bouchard) Fortin. Roger lived most of his early years in Vermont where he attended local schools. Roger served our country, during WWII, in the U.S. Army where he attained the rank of Technician Third Grade. Upon his discharge, Roger made his home in Holyoke. He was a parishioner of the former Our Lady of Perpetual Help Church. He worked as the Superintendant at Mountain Park where he retired after forty years of service. He was a lifelong member of the Holyoke Elks Lodge 902. Roger enjoyed Skiing at Mt. Tom and Okemo Mt. into his 80�s. He leaves to cherish his memory, his wife of sixty-five years, Doris L. (Lafleur) Fortin of Holyoke; his son, Roger and his wife Mary of Holyoke; his two daughters, Linda Ferguson and her husband Ralph of Mississippi and Michele Duval of West Springfield; his brother, Gilles of VT; his three sisters, Gisele Mientka of Leeds, MA, Gaetane Fortin of Northampton and Martha Brisson of Canada; his six grandchildren, four great grandchildren and many nieces and nephews. In addition to his parents, Roger was also predeceased by his brother, Yves and his three sisters, Sister Agnes Lucille, Yvette McCann and Sister Constance Fortin. A funeral procession will form on Tuesday, July 19 at 8:45 a.m. followed by a Liturgy of Christian Burial at 10:00 a.m. at Our Lady of the Cross Parish, Dwight St. Holyoke. Burial with military honors will follow the Liturgy in Notre Dame Cemetery in South Hadley. Calling hours will be Monday, July 18 from 4:00 p.m. to 8:00 p.m. at the Messier Funeral Home 1944 Northampton St. Holyoke. In lieu of flowers, memorial contributions may be made in Roger�s memory, to either the Holyoke Merry Go Round, 221 Appleton St. Holyoke, MA 01040 or to a charity of one�s choice. Please visit www.messierfuneralhome.com to share a story with Roger�s family.

The family of Roger J. Fortin created this Life Tributes page to make it easy to share your memories.

Send flowers to the Fortin family.