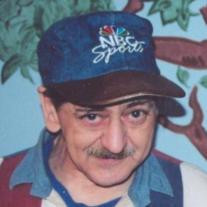 Richard D. Sullivan 1949 � 2010 Easthampton � Richard D. �Rich� Sullivan, 61, passed away at home surrounded by his beloved family after a long illness on Sunday, May 16. He was born in Ludlow on April 5, 1949, the son of the late Henry S. and Ann (Barna) Sullivan. He was a forty year Easthampton resident, formerly of Holyoke. He attended local schools and was a graduate of Holyoke Catholic High School and received his MBA from Westfield State College. Rich was previously employed for many years as an account manager at Rexham Graphics of South Hadley. Rich always put his family first and enjoyed the many vacations and time together that they shared. He enjoyed gardening, fishing, golfing, the Red Sox, New England Patriots, and watching cartoons with his beloved grandchildren. He also previously coached little league baseball and basketball for the Easthampton Parks and Recreation Department. He is survived by his beloved wife of thirty nine years, Susan (Cote) Sullivan, his son, Brian R. Sullivan and his girlfriend Shawna Poudrier, two daughters, Catherine A. Schwartz and her husband Doniel, and Kerry A. Bilski and her husband Phillip, all of Easthampton. He will be sadly missed by two grandchildren, Kerissa C. Bilski, Caden J. Crouse, and many nieces and nephews. The funeral procession will form at 8:30am on Friday, May 21 at the Messier Funeral Home, 1944 Northampton St. (Route 5) Holyoke, followed a Liturgy of Christian Burial at 10am at Notre Dame Church, 35 Pleasant St, Easthampton. Burial will be in Brookside Cemetery. Calling hours at the funeral home are on Thursday, May 20 from 4 � 8pm. Contributions in Richard�s memory may be directed to the Jimmy Fund, Dana � Farber Cancer Institute, 10 Brookline Place West, 6th Floor, Brookline, MA 02445-7226. ATTN: Contribution Services. $(document).ready(function(){ flowplayer("vidplyr1", "/tools/flowplayer/flowplayer-3.1.2.swf", { clip: { autoPlay: false, onStart: function(clip) { stopBGMusic(); } } }); });

The family of Richard D. Sullivan created this Life Tributes page to make it easy to share your memories.

Send flowers to the Sullivan family.