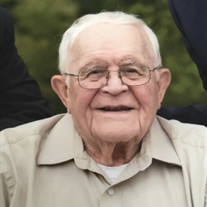 Tribute Richard Norman, patriarch of the Marcotte family, and member of the GREATest generation passed away early in the morning of December 14, 2020, in the comfort of his own home, with his daughter Paula and his son-in-law John Budynkiewicz by his side. He was born December 17, 1921 in Chicopee to parents Eugene and Clara (Richard) Marcotte. At a young age, he moved to Gates Street in Holyoke, where he worked mornings before school at a family store, while his father went out to deliver bread door to door. A 1940 graduate of Holyoke High School, he was a popular ballroom dance partner and also performed an Adagio tap routine with his sister Viv on the Victory Theatre and Metcalf School stages during the 1930’s. He attended Holyoke Vocational School for six months and worked as an air compressor tester at what was then Worthington Pump Co.. He enlisted in the U.S. Navy in October 1942 to become part of an armed guard crew on a merchant marine ship. He spent 3 days on a raft in the Indian Ocean when the S.S. Deer lodge he was on was torpedoed and sunk by a German U-boat. A British hospital ship picked up survivors and brought them to Cape Town. He traveled the entire globe during 3 1/2 years of Naval service. He was awarded the WWII Victory Medal, American Area Medal, Asiatic Pacific Medal, and European African Middle Eastern Medal - Bronze Star. While stationed in 1945 in California he started dating former HHS classmate and future wife Shirley E. Winkler. She was in the Naval Reserve and stationed in San Francisco. The war ended, both returned to Holyoke. They were married on Flag Day, June 14, 1947. Richard went back to work at the Worthington Pump and remained working there as it transitioned to Atlas Copco. He and Shirley raised their children Joanne, Paula and Stephen in Holyoke at the top of Fairmont with a view to the east overlooking the valley (all the way to the Quabbin Reservoir). He was an active leader in Boys Scouts, Girl Scouts, Red Cross First Aid Instructor and Swim Instructor. He loved horses, feeding the birds (and squirrels, chipmunks and bears) and learning about history. He was an avid camper, cross country skier, snowmobiler and loved working with his hands. He helped many friends and relatives with remodeling projects and built a second home with his son, Steve in Heath, MA during the 1970’s. After his wife died in 1974, he took on caregiving activity for his Uncle Leonard Marcotte, aunts Yvonne Madru, Albina Brady, Alma Baulne and cousin Bertha Maloney. He took great pleasure and found great comfort in saying daily prayers and attending weekly mass, most recently at Blessed Sacrament parking lot. His life was all about SERVICE TO OTHERS and he was never boastful. He was a proud and passionate liberal and pacifist. In recent years he became a fixture at the Soldiers Home annual motorcycle run watching this activity from his front yard. And on May 7, 2020 a photo of him appeared on the front page of The Republican as Richard watched the Flyover Tribute to healthcare workers. St. Patrick’s Road Race Day, he and Paula sat on Cherry Street by the Soldiers Home entrance. Hundreds of runners would take time to high five him as they ran by this WWII vet in his wheelchair. Thank you, runners, for making his day and giving Paula a sense of great pride. Spirit and enthusiasm for family will live on in Richard’s 3 children, Joanne, Paula (John Budynkiewicz), and Stephen (Linda Vilbon). Sadly, missing him are grandchildren Rich Marcotte of South Hadley, Stephen Marcotte (wife Katja) of Elizabeth City, NC, Eugene Marcotte (wife Ellen) of Watertown, MA and Rita Marcotte of Rutland, VT and great grandchildren Deacon, Samuel, Reid and Grace. He leaves behind a dear friend and favorite Mt. Park dance partner Cleo (Stevens) Hamel and a distant relative Erika (Friedrich) Herring who loved him dearly, several nieces and nephews and several godchildren. His sister Vivian Barnard of Michigan and brother Russell of Florida predeceased him. Thank you, dad, for all the support and time you gave us throughout your lifetime. You taught by example and we will forever love you. Richard’s family is very grateful for the VA services he received, the Soldiers Home Outpatient Clinic personnel, the home health aides who provided personal care and the Holyoke VNA Hospice, Take and Eat Meals, and WestMass ElderCare. Please be mindful, state and federally funded programs are very beneficial and necessary for our elderly. A period of visitation will be held on Monday December 21, 2020 from 11 am – 12noon at the Messier Funeral Home, 1944 Northampton St., Holyoke with a service at 12noon in the funeral home. Committal services with Military Honors will follow in Forestdale Cemetery, Cabot St. in Holyoke. A celebration of life will be held at a future date. In lieu of flowers, contributions may be made to Providence Ministries for the Needy of Holyoke, 51 Hamilton St., Holyoke, MA 01040. For directions or to leave a condolence for the family, please visit www.messierfuneralhome.com To send flowers to the family or plant a tree in memory of Richard Norman Marcotte, please visit our floral store.

Tribute Richard Norman, patriarch of the Marcotte family, and member of the GREATest generation passed away early in the morning of December 14, 2020, in the comfort of his own home, with his daughter Paula and his son-in-law John Budynkiewicz... View Obituary & Service Information

The family of Richard Norman Marcotte created this Life Tributes page to make it easy to share your memories.

Tribute
Richard Norman, patriarch of the Marcotte family, and...

Send flowers to the Marcotte family.