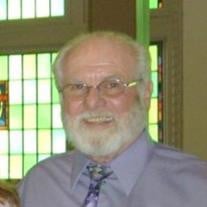 Richard Goessling 1941-2014 HOLYOKE- Richard Goessling, 73, passed away at home surrounded by loved ones on October 15, 2014. He was born on January 17, 1941 in Ludlow to the late Theodore Goessling and the late Virginia Geddis Dobrozensky. Richard graduated from the former Springfield Trade High School. He proudly served in the United States Navy for two years and then the Naval Reserves. He worked as an HVAC Service Tech for 38 years, retiring from the Carrier Corporation. Richard was a member of the Plumbers and Pipefitters Local Union #104. He was also a life time member of the Westfield-West Springfield Elks and the NRA. Richard enjoyed deer hunting and being in the woods each Autumn. Richard and his wife Brenda loved riding their motorcycles together, whether a short trip to Vermont or Maine to cross-country excursions to New Mexico and south to Florida for Bike Week. Richard will best be remembered for his devilish smile and his practical jokes he played on those around him. He was predeceased by his step-father, Walter Dobrozensky; and a brother-in-law, Alex Vincensi. Richard is survived by his wife of 48 years, Brenda Vincensi Goessling; a son, Mark Goessling; a daughter, Gina Thibeault and her husband Mark; two grandchildren, Virginia and Oliver; a sister, Gloria Eagan; a brother-in-law George Vincensi; a sister-in-law Avis Vincensi; and several nieces, nephews, grand nieces, and grand nephews. Calling hours will be held Wednesday, October 22 from 3-5PM in Messier Funeral Home, 1944 Northampton St, Holyoke, with a funeral home service will be celebrated at 5PM. Donations may be made in Richard�s memory to National Parks Conservation Association Attn: Membership Dept., 777 6th St, NW Suite 700 Washington, DC 20001 or The American Heart Association Western MA Regional Center, 54C Wayside Ave, West Springfield, MA 01089.

Richard Goessling 1941-2014 HOLYOKE- Richard Goessling, 73, passed away at home surrounded by loved ones on October 15, 2014. He was born on January 17, 1941 in Ludlow to the late Theodore Goessling and the late Virginia Geddis Dobrozensky.... View Obituary & Service Information

The family of Richard Goessling created this Life Tributes page to make it easy to share your memories.

Send flowers to the Goessling family.