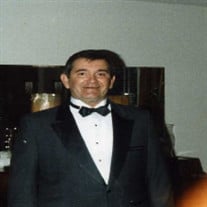 Richard C. Goehring 1923 � 2009 HOLYOKE - Richard C. Goehring II, 85, died Saturday, January 24, 2009 at the Holyoke Health Care Center. He was born in Holyoke on April 12, 1923 to the late Karl and Ruby S. (Chapman) Goehring. Richard graduated from Holyoke High School in 1940 and Northeastern University in 1951. He proudly served our country during WWII in the United States Navy, where he attained the rank of Yeoman 2nd Class and participated in Admiral Byrd�s South Pole expedition. He also earned the WWII Victory Medal, the Good Conduct Medal and the Asiatic-Pacific Medal. Richard, an Eagle Scout as a boy, worked as a longtime District Executive for the Boys Scouts of America. He was an active member of the Zion�s Lutheran Church in Pittsfield, where he served on the church council and sang in the choir. After retirement, Richard proudly worked as a school bus driver in Berkshire County. Richard will be fondly remembered by his wife of sixty-one years, Grace E. (Wagner) Goehring of Holyoke; his two sons, Richard C. Goehring III and his wife Carol of St. Johnsbury, VT and David A. Goehring and his wife Lori of Winchester, MA; his daughter Janet A. Boyer and her husband William of Great Barrington, MA; his three brothers, Robert Goehring of N.H., Glenn Goehring of Southampton and Fredrick Goehring of Chicopee; his seven grandchildren, Gwendolyn, Shannon, Emma, Nathaniel, Alexander, Sarah and Hope and his four great-grandchildren, Justice, Kristina, Haley and Riley. Mr. Goehring was predeceased by his daughter G. Elizabeth Goehring in 1969 and his brother Karl Goehring in 2004. A funeral procession will form on Wednesday, January 28 at 9:45 a.m. at the Messier Funeral Home, 1944 Northampton St, Holyoke, MA. A service will follow at 11:00 a.m. at St. Peter�s Lutheran Church in Holyoke. Burial will be in Forestdale Cemetery in Holyoke. Calling hours will be Tuesday, January 27 from 4:00 p.m. to 7:00 p.m. at the funeral home. In lieu of flowers, the family has requested that memorial contributions be made in Richard�s memory to St. Peter�s Lutheran Church, Memorial Fund, 34 Jarvis Ave, Holyoke, MA, 01040.

The family of Richard C. Goehring II created this Life Tributes page to make it easy to share your memories.

Send flowers to the Goehring family.