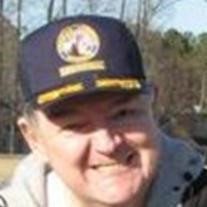 HOLYOKE- Richard G. Couture, Sr., 65, a longtime resident here passed away unexpectedly on Saturday, April 30, 2011 in Chesapeake, VA where he had been residing for the past 10 years. Richard was born in Holyoke, MA on June 19, 1945 a son of the late George and Stella (Benoit) Couture. He was educated and raised in Chicopee and enlisted in the US Marine Corps as a young man. Richard served as a Sargent in the USMC during the Vietnam War and was honorably discharged after 15 dedicated years of service and received the Good Conduct Medal / 2nd Award, Meritorious Unit Commendation as well as several other achievements. Richard married Brenda (Walker) Couture in 1969 and the couple recently celebrated 41 years together. Richard retired from the Connecticut Department of Corrections where he served as a corrections officer for over20 years. In addition to his wife, Richard is survived by his three sons, LCDR Richard G. Couture, Jr. and his wife CMDR Jennifer Couture of Chesapeake, VA; CT Correctional Officer Brian Couture and his wife Tina of South Hadley, MA; Scott Couture G.S.M. for Bolles Chrysler, Jeep and Dodge and his wife Jennifer Couture of Feeding Hills, MA. Richard will be greatly missed by his 6 adored grandchildren; Rachel, Briana, Leo, James Richard, Jason and Erik Couture. He is a devoted husband, father and Peper� and truly loved to watch his children and grandchildren play sports and volunteered his free time to several youth organizations. Visiting hours will be held on Friday, May 6, 2011 from 4-7 PM at Messier Funeral Home, 1944 Northampton St., Holyoke with a funeral ceremony at 6:30 PM. All are invited to join together on Saturday, May 7, 2011 at 7:45 AM at the funeral home and process to Notre Dame Cemetery, South Hadley for final prayers and military honors. Please visit www.messierfuneralhome.com to share stories and pictures, offer condolences, view his memorial webpage and get directions for all Richards services. You are using an outdated web browser that does not support this video. Your browser does not support this video format. You should be able to view it in Chrome, Safari or Internet Explorer. $(document).ready(function(){ if ( false === supports_h264_baseline_video() ) { $("#vdfmtnt").show(); $("#vidplyr1").hide(); } });

HOLYOKE- Richard G. Couture, Sr., 65, a longtime resident here passed away unexpectedly on Saturday, April 30, 2011 in Chesapeake, VA where he had been residing for the past 10 years. Richard was born in Holyoke, MA on June 19, 1945 a son of... View Obituary & Service Information

The family of Richard Gerard Couture created this Life Tributes page to make it easy to share your memories.

Send flowers to the Couture family.