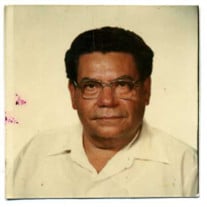 Rafael Santiago 1921 � 2009 HOLYOKE � Rafael �Rafa� Santiago Nazario of Holyoke, passed away on February 26, 2009 at the age of 87. Rafa was born in Jayuya, Puerto Rico on March 15, 1921. He was a member of the Iglesia Cristiana Pentecostal Church since his conversion in March of 1995 and devoted the rest of his life to Christ. He is survived by his beloved wife Esther Santiago. Rafael was a loving father to Maria E. Sotolongo, Ruben Santiago, Guillermo Santiago, Elsa Santiago, Luis Santiago, Rubin Santiago, Lydia Santiago and Ralphy Santiago. He is predeceased by his eight brothers and sisters, and is survived by his beloved sister Miguelina Gonzalez. Rafa leaves behind twenty grandchildren, twenty-eight great grandchildren and four great-great grandchildren. When it comes to diamonds, Rafa was a master in his field. He worked as a Diamond Lapadist since the age of 16 and retired at the age of 78. Throughout his career, he trained over 150 students, teaching them the exceptional skill of diamond cutting. Rafa started his career in Puerto Rico, and worked for many different company�s throughout his tenure. Rafa spent a year in Spain helping to establish a diamond factory, then returned to New York City�s diamond district for the remainder of his career. Rafa enjoyed playing chess, cards, and guitar. He devoted much of his free time to his family, teaching music and valuable lessons to his grandchildren. His joyful presence will always be remembered. There will be a funeral service on Tuesday, March 3, at 9:00 a.m. at the Iglesia Cristiana Pentecostal Church, 96 Cabot St, Holyoke, MA. Burial will follow in Forestdale Cemetery in Holyoke. Calling hours will be on Monday, March 2 from 6:00 p.m. to 9:00 p.m. at the church. Memorial contributions, may be made in Rafa�s memory, to a charity of one�s choice.

The family of Rafael Santiago created this Life Tributes page to make it easy to share your memories.

Send flowers to the Santiago family.