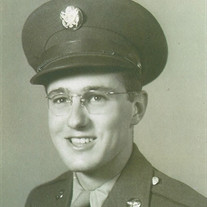 Tribute Paul A. Perron, 93, passed away peacefully on Monday January 20th, 2020 at the Soldiers’ Home in Holyoke. Born in Holyoke, MA to the late Armand and Marie Anne (Desmarais) Perron, he graduated from Precious Blood High School in Holyoke and received Associates Degrees from Holyoke Community College and Western New England University. Paul served his country honorably in the Army Air Corps. During WWII, stationed in French Morocco Africa and then later re-called to active duty during the Korean Conflict to the Westover Air Force Base. Paul was in the Air Force Reserves for 27years, attaining the rank of Corporal and Master Sergeant before retiring in 1971. Paul was awarded the Army Good Conduct Medal, American Campaign Medal, the European-African-Middle East Campaign Medal and the World War II Victory Medal. In 1948, Paul married the love of his life, Yvette (St. Germain) Perron and re-located to the Fairview Section of Chicopee where he remained for 68 years. Throughout his career, Paul was an Accountant for various businesses and upon retiring, worked at the Messier Funeral Home, and in the school department with the lunch program. He even took up cross country skiing with his nieces when he was in his late 50’s. Paul was devoted to his Catholic Faith and was a communicant of St. Anne’s Church in Chicopee. He was predeceased by his wife Yvette in 2010; his sister, Lillian J. (Perron) Ouellette in 2006; a nephew, Robert Taylor in 1997; niece, Jeanne (Ouellette) Roberge in 2011; nephew, David St. Germain in 2017 and nephew Ralph Taylor in 2012.  Although he had no children, he was blessed with his many nieces and nephews, Ann Lee (St. Germain) Jubinville, Mark St. Germain and his wife Dorothy, Denise (Archambault) Turgeon and her husband Ralph, Diane Archambault, Donna Archambault and Ronald St. Germain; cousin, William Salois and many cousins in Canada. The Family wishes to thank the Holyoke Soldiers’ Home for their compassionate care for Paul over the years. Family and friends are invited for calling hours (TODAY) Wednesday January 22nd from 4 – 7 PM at the Messier Funeral Home, 1944 Northampton St., Holyoke. Pauls’ funeral will be held on Thursday January 23rd at 8:45 am at the Messier Funeral Home, followed by a Liturgy of Christian Burial at 10 AM at St. Anne’s Church, 30 College St., Chicopee. Committal Services will be held in Notre Dame Cemetery in South Hadley. In lieu of flowers, memorial donations may be made in Paul’s Memory to the Holyoke Soldiers’ Home (Recreation Department), 110 Cherry St., Holyoke, MA 01040. www.messierfuneralhome.com To send flowers to the family or plant a tree in memory of Paul A. Perron, please visit our floral store.

Tribute Paul A. Perron, 93, passed away peacefully on Monday January 20th, 2020 at the Soldiers&#8217; Home in Holyoke. Born in Holyoke, MA to the late Armand and Marie Anne (Desmarais) Perron, he graduated from Precious Blood High School in... View Obituary & Service Information

The family of Paul A. Perron created this Life Tributes page to make it easy to share your memories.

Tribute
Paul A. Perron, 93, passed away peacefully on Monday...

Send flowers to the Perron family.