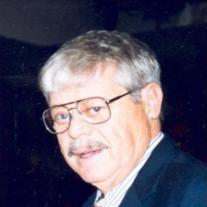 PAUL N. DONZE, SR. 1939 � 2011 CHICOPEE- Paul Norman Donze, Sr., 72, passed away peacefully at Metropolitan Hospital in Miami, FL on Monday, September 5, 2011. Paul was born in Holyoke on April 10, 1939 a son of the late Armand and E. Mae (Rogers) Donze. He was a graduate of Holyoke Trade School and enlisted in the U.S. Air Force. He served as an air policeman in the service and was honorably discharged in 1964. Paul was a finish carpenter for most of his working life and owned and operated Donze Construction in Chicopee for over 20 years. Paul was a longtime Chicopee resident and has spent the last 10 years in Florida. He enjoyed fishing, hunting and was an avid sports fan. He was a lifetime member of the Elk�s Lodge #1849 and was a member of the Knights of Columbus. Paul is survived by his wife, Viola (Courchesne) Donze of Chicopee; his two sons, Paul �PJ� N. Donze Jr. and his wife Darlene of Chicopee; Joe Donze and his wife Keri of Richmond, VA; his sister, Betty and her husband Bill Krause of Belchertown; his three sisters in law, Rhonda Donze of South Hadley; Isa Donze of Bayamon P.R.; Tsuyuko Donze of Palm Bay, Florida as well as his many nieces and nephews. Paul was predeceased by his three brothers Bob, Joe, and Bill. Paul will be missed especially by his six adored grandchildren, Stefanie, Tayler, Bryan, Jillian, Brittany and Nathan Donze. Visiting hours will be held on Sunday, September 11, 2011 from 1-4 PM at Messier Funeral Home, 1944 Northampton St., Holyoke. His funeral will begin on Monday, September 12, 2011 at 7:45 AM from Messier�s with a Liturgy of Christian Burial at 9 AM in Blessed Sacrament Church, 1945 Northampton St., Holyoke. The Rite of Committal and burial with military honor will be held at the chapel of the Massachusetts Veterans� Memorial Cemetery, 1390 Main St., Agawam, MA 01001. In lieu of flowers, memorial donations can be made to the Wounded Warrior Project, PO Box 758517, Topeka, KS 66675-8517. Please visit www.messierfuneralhome.com to share condolences, stories, pictures and view Paul�s personal lifetime webpage and life tribute video. You are using an outdated web browser that does not support this video. Your browser does not support this video format. You should be able to view it in Chrome, Safari or Internet Explorer. $(document).ready(function(){ if ( false === supports_h264_baseline_video() ) { $("#vdfmtnt").show(); $("#vidplyr1").hide(); } });

The family of Paul Norman Donze created this Life Tributes page to make it easy to share your memories.

Send flowers to the Donze family.