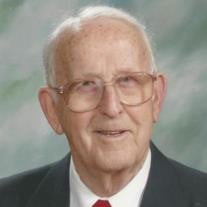 Patrick J. Higgins, 93, champion elderly advocate, public servant, leader, outstanding citizen, neighbor but most especially a devoted family man to his wife, children, grandchildren and sister departed this life on Thursday, September 10, 2015 in the comfort and care of his family at the Soldiers Home in Holyoke. He was born in Holyoke on March 2, 1922 to Peter P. Higgins and Annie Ferguson the fifth child in the family of six. A true �Holyoker�, Pat grew up in the Churchill Section of the city and graduated from Sacred Heart High School in 1939 and later from Holyoke Community College in 1971. After high school he began working at Growers Outlet in Holyoke before enlisting in the US Army Air Corps. He served honorably in the Corps of Engineers during WWII in England, Belgium, France and Germany as well as serving at the SHAEF HQ in Versailles before heading home to the states in 1946. Pat returned to the Growers Outlet and went on to be the manager in Holyoke, Northampton and Greenfield. He was appointed policeman in 1948 and continued serving the community for over 39 years as a patrolman, a detective in the vice bureau and later as a Holyoke District Court Prosecutor and Elderly Liaison retiring in 1987. His leadership and integrity continued while he was elected a City Councilor at Large for 16 years. Pat served on numerous boards in various roles and included President of the Senior Citizens Club for 11 years, Holyoke Housing Authority Commissioner, President of the Massachusetts Police Association 1985-1986, Member of the American Legion Post # 351 and Knights of Columbus. Pat also served as an ambassador at Messier Funeral Home for over 30 years and donated much of his time to assist at Blessed Sacrament Church and Holy Cross Church. He was awarded the Citizen of the Year Award in 2004 and continued to lead the �I Love Holyoke� campaign. In addition to his parents, he was predeceased by his beloved wife of 66 years, Patricia Sullivan in 2012 and by a daughter, Kathleen Higgins-Hance in 2010 as well as his siblings Owen, Eleanor Lawler, Anna Zielinski and Dorothy Lucchesi. He is survived by a sister, Peggy Bombardier; his children, Patricia Gareau and her husband Denis; Peter Higgins and his wife Kathleen; Michael Higgins and his wife Mary Frances, Grampa leaves 9 grandchildren; 9 great grandchildren; a great great grandson and several nieces, nephews and cousins. Pat�s family is very appreciative of the care and concern that the staff at the Soldiers Home provided to Grampa and the entire Higgins family during his stay. Visiting hours will be held on Wednesday, September 16, 2015 from 4-7PM at Messier Funeral Home, 1944 Northampton Street. His funeral will begin on Thursday, September 17, 2015 at 9:45AM from the funeral home and followed by a Liturgy of Christian Burial at 11AM in Blessed Sacrament Church. The Rite of Committal and Burial with military honors will be in St. Jerome Cemetery all in Holyoke. In lieu of flowers, donations can be made to Holyoke Soldiers Home Activity Fund, 110 Cherry St., Holyoke, MA 01040 or to Jericho, 537 Northampton St., Holyoke, MA 01040. You are using an outdated web browser that does not support this video. Your browser does not support this video format. You should be able to view it in Chrome, Safari or Internet Explorer. $(document).ready(function(){ if ( false === supports_h264_baseline_video() ) { $("#vdfmtnt").show(); $("#vidplyr1").hide(); } });

The family of Patrick Joseph Higgins created this Life Tributes page to make it easy to share your memories.

Send flowers to the Higgins family.