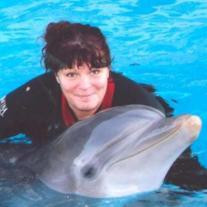 Patricia Berard1957 � 2010Holyoke � Patricia A. �Pat� Berard, 52, a thirty five year Holyoke resident, died at home suddenly on Monday, April 26. She was born in Ludlow on October 28, 1957, a daughter of Norma H. (Leonard) Berard of Ludlow and the late George W. Berard. She was a graduate of Belchertown High School and employed as an ASC Certified Cook for twenty five years at various locations in the Holyoke School System. Pat leaves a legacy as always being happy with a great sense of humor, being a hard worker, and being loved by many. Her favorite day was Halloween; she loved dolphins, her canine companion �Mama�, and was a big Red Sox fan. Most of all, Pat cherished her children and grandchildren. In addition to her mother, she is survived by two sons, Jorge Nieves and Charles Berard, both of Holyoke, and her daughter, Chandra Berard of Chicopee. She also leaves five brothers, Michael Sullivan of South Dakota, Lawrence Breton of North Carolina, David Breton of Westfield, George Berard of Indiana, and Paul Berard of Three Rivers, three sisters, Susan Rowe of Brimfield, Virginia Berard of Bondsville, and Kathleen Berard of Holyoke. She will be sadly missed by thirteen grandchildren, many nieces and nephews, aunts, uncles, and cousins. She was predeceased by her soul mate, Vincent E. Thaxton in 2005. Funeral services are on Monday, May 3 at 9am from the Messier Funeral Home, 1944 Northampton St. (Route 5) Holyoke, followed by a Liturgy of Christian Burial at 10am at Blessed Sacrament Church. Burial will follow in Forestdale Cemetery. Calling hours at the funeral home are on Sunday, May 2 from 2 - 6pm. You are using an outdated web browser that does not support this video. Your browser does not support this video format. You should be able to view it in Chrome, Safari or Internet Explorer. $(document).ready(function(){ if ( false === supports_h264_baseline_video() ) { $("#vdfmtnt").show(); $("#vidplyr1").hide(); } });

The family of Patricia A. Berard created this Life Tributes page to make it easy to share your memories.

Send flowers to the Berard family.