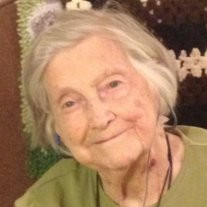 HOLYOKE- Millie (Hoessler) Lefebvre, 98, passed away peacefully at Loomis House in Holyoke on Wednesday, April 17, 2013. Millie was born in Holyoke on March 17, 1915 a daughter of the late Paul and Anna (Schlichting) Hoessler and educated in South Hadley Schools. Millie was a devoted wife, mother, grandmother, great grandmother, sister and aunt. She was primarily a homemaker who enjoyed flowers, reading, politics and life�s simple pleasures. She was predeceased by her husband of 64 years, Leo H. Lefebvre in 1999 as well as by her two brothers, Roy and Robert Hoessler and two sisters, Anna Wilhelmi and Ruth Seiffert. Millie is survived by her son and daughter in law, Alvin and Darlene (Gelinas) Lefebvre of South Hadley; two grandchildren, Robert Lefebvre of South Hadley; Kristen Lefebvre Stafford and her husband Chris and two great grandchildren Reese and Harper Staffford all of Ijamsville, MD. Millie will be missed by her numerous nieces, nephews and great nieces and nephews. Millie and her family are grateful for the heartfelt care and companionship that was provided by the entire staff at Loomis House in Holyoke while Mille was a resident. Visiting hours will be held on Monday, April 22, 2013 from 4-7 PM at Messier Funeral Home, 1944 Northampton St., Holyoke. A funeral home service will be conducted by Charles and Roberta Morkin, Pastoral Team of the United Congregational Church, Holyoke on Tuesday, April 23, 2013 at 10AM in Messier Funeral Home. The burial will follow in Forestdale Cemetery, Cabot St., Holyoke. If friends desire, memorial donations may be made in Millie�s� name to The Shriners Hospital, 516 Carew St., Springfield, MA 01104. Please visit www.messierfuneralhome.com for more details.

HOLYOKE- Millie (Hoessler) Lefebvre, 98, passed away peacefully at Loomis House in Holyoke on Wednesday, April 17, 2013. Millie was born in Holyoke on March 17, 1915 a daughter of the late Paul and Anna (Schlichting) Hoessler and educated in... View Obituary & Service Information

The family of Millie Lefebvre created this Life Tributes page to make it easy to share your memories.

Send flowers to the Lefebvre family.