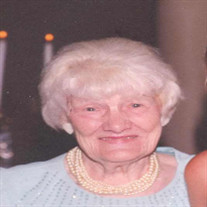 Mary Pouliot 1921 � 2010 Holyoke � Mary M. (Wasilenko) Pouliot, 88, passed away on Saturday, February 6 at Loomis House Nursing Center in Holyoke. She was born in Holyoke on March 6, 1921, and lived for many years on Janine Street in Chicopee. She was the daughter of the late John and Mary (Czescza) Wasilenko. Mary was well known in Holyoke where she worked as a waitress for many years at the Ross Diner. She was also the proprietor of Cinderella�s Cleaners in Holyoke. She was very active in the city of Holyoke and received recognition from the Mayor for Citizen of the Month. She also volunteered for many years at Celebrate Holyoke, was active in the War Memorial, and a member of the Seibel Apartments Tenants Association. She was also very proud to be a member of the Women�s Auxiliary Post 325 in Holyoke. For many years, Mary volunteered daily at her daughter�s bridal shop �Lorraine�s Fashion Showcase�, coordinating all of her bridal booths and fashion shows. In Chicopee, she worked for many years at the Princess Diner, Millie�s Pierogi�s, Bernie�s, and her daughter Carmella�s restaurant; Johnnie�s 3-D Grinders. She lived in Hollywood, Florida for a few years and worked at the Hillcrest Country Club, and was active in the Hallandale Senior Center. Her passion in life was her endless dedication, devotion and love for her children. She was the loving mother of eight and a pyramid of strength and knowledge for them and will be sadly missed by two sons, Richard Pouliot and his wife Edythe of Greenville, SC, Jack Pouliot of Fort Lauderdale, FL; five daughters, Lorraine Gorham and her husband Bucky, and Linda Cessarini, both of Holyoke, Jill Sampson of Ponte Vedra Beach, FL, Carmella Michon of Jacksonville, FL, and Katie Scancarelli and her husband Bob of Pompano, FL. She was predeceased by her beloved daughter, Marilyn Cormier on August 4, 1998. She also leaves her brother, Frederick Wasilenko of Easthampton, her sister, Ann Pappas of South Hadley, sixteen grandchildren, five great grandchildren and several nieces, nephews and son in law Nick Cormier and his wife Michelle. She was predeceased by�two brothers, Alex and John Wasilenko, and her sister, Anastasia LaPorte. Funeral services are on Saturday, February 13 at the Messier Funeral Home, 1944 Northampton St (Route 5) Holyoke with a period of visitation from 9 -11am followed by a Service of Remembrance at 11am. Burial will follow in Mater Dolorosa Cemetery in South Hadley. In lieu of flowers, contributions in her memory may be directed to the Soldiers Home of Holyoke, 110 Cherry St., Holyoke, MA 01040.

The family of Mary M. Pouliot created this Life Tributes page to make it easy to share your memories.

Send flowers to the Pouliot family.