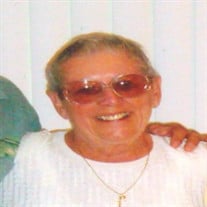 Marion E. Laraway 1936 � 2009 Holyoke � Marion E. (McFaul) Laraway, 73, a lifelong Holyoke resident, died on Monday, December 7, 2009. She was born on January 22, 1936, a daughter of the late John �Chicky� and Eleanor (Hagan) McFaul. She attended local schools and was a graduate of Holyoke High School and also attended Holyoke Community College. She retired after ten years of service as an Administrative Assistant for the American Red Cross. Marion was a very active political supporter and contributor of the community and a member of the Republican Club, a board member of the Holyoke Geriatric Authority, volunteered her free time at blood drives, member of the Women�s Moose Club of Chicopee, AARP, Republican National Committee, and member of the Order of the Eastern Star � Robert Morris Chapter 51. She was the wife of the late Vincent R. Laraway who died on May 15, 2008. She is survived by two sons, Vincent of Florida, and Clifford of Westfield, and her daughter, Elizabeth Brosnan of Sturbridge and eight grandchildren, Dennis, Kaitlin, and Patrick Brosnan of Sturbridge, Clifford, Treavor, Conner and Catie Laraway of Westfield, and Samantha Laraway of Florida. Calling hours for Marion will be held at the Messier Funeral Home, 1944 Northampton St (Route 5) Holyoke on Wednesday, December 9 from 4 � 8pm. Burial will be at the convenience of the family. In lieu of flowers, contributions in her memory may be directed to the Holyoke Merry Go Round, 221 Appleton St., Holyoke, MA 01040.

The family of Marion E. Laraway created this Life Tributes page to make it easy to share your memories.

Send flowers to the Laraway family.