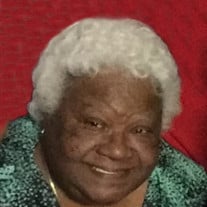 MARIA V. VELASQUEZ 1951 � 2017 SPRINGFIELD � Maria Victoria (Mateo) Velasquez, 66, affectionately known as �El Bonbon�, �La Pichona�, �Yolanda� passed away at her home surrounded by her loving family on August 16, 2017. She was predeceased by her husband Ricardo Velasquez in April of 1999. She was born in Salinas, Puerto Rico on January 28, 1951 a daughter of the late Margaro Mateo and Ester Maria Rodriguez. She came to the U.S. as a young girl and settled in Boston. She has been residing locally for many years where she enjoyed celebrating her birthday with her family, raising her children and spending time with her grandchildren and extended family. Maria was a volunteer for the Brown Bag program at the Springfield Senior Center on Jenny Lane where she made many lifelong friends and loved helping others. She worked for several years at the Holyoke Hospital in the environmental services department, primarily in the laundry. Maria loved playing Bingo with her lucky elephants and was a member of the Golden Age Club. She was always willing to share her advice with her family and her gentle touch will be missed by all. Maria is survived by her four daughters, Adalia Velasquez of Indian Orchard; Auria Torres of Springfield; Adabel Velazquez of Indian Orchard; Maria Mateo of Holyoke; her three sons, Ricardo Velasquez of Indian Orchard; Edgardo Velasquez of Springfield and Richard Gonzalez of Puerto Rico. �Wela� leaves behind her 11 grandchildren, Rachel, Alyssa, Ava, Michael, Justin, Brandon, Joel, Trey, Elliot, Andru and Ricky; four great grandchildren, Jaydiss, Savian, Victoria and Alanis as well as her three sisters and three brothers, Margarita Mateo of Springfield; Blanca Mateo of Springfield; Loida Mateo of Springfield; Gregory Mateo of Springfield; Guichin Mateo of Puerto Rico and Raul Mateo of Puerto Rico. Maria will be missed by many nieces, nephews, cousins, extended family members and many dear friends. In addition to her parents, Maria was also predeceased by a sister, Zenaida Mateo. Life celebration hours will be held Sunday, August 20, 2017 from 3-6PM at Messier Funeral Home, 1944 Northampton St., Holyoke, MA 01040. Her funeral will begin on Monday, August 21, 2017 at 8:30AM from Messier Funeral Home and be followed by a Liturgy of Christian Burial at 10 AM in Immaculate Conception Church, 54 North Summer St., Holyoke, MA 01040. Rite of Committal and Burial will follow in Oak Grove Cemetery, Spfld. Please visit www.messierfuneralhome.com for a complete obituary and more details. $(document).ready(function(){ var ifr = $("#07s00357153x65e0"); ifr.data("ratio", ifr.attr("height")/ifr.attr("width") ); ifr.removeAttr("width").removeAttr("height"); // Resize the iframes when the window is resized $(window).resize(function(){ var width = ifr.parent().width(); ifr.width(width).height(width * ifr.data("ratio")); }).resize(); });

The family of Maria Victoria Velasquez created this Life Tributes page to make it easy to share your memories.

Send flowers to the Velasquez family.