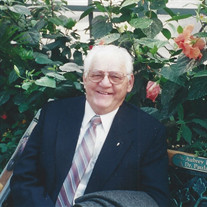 LEONARD G. ABBEY 1925 - 2017 HOLYOKE- Leonard Abbey, 92, heard the call of the last trumpet on Wednesday, August 23, 2017 and entered eternal rest and peace. He was an accomplished musician who donated much of his time sharing his love of music with others. He was born in Huntington, MA on March 5, 1925 a son of the late Wellington F. Sr and Marie (Garneau) Abbey and graduated from Huntington High School in 1943. He then entered the U.S. Army and served honorably during WWII. Len worked for many years as a salesman in international marketing for Texon and later at Smith & Wesson. He was a graduate of Dale Carnegie and attended WNEC where he studied business. He later opened his own business, L& R Roofing and operated it for over 20 years before retiring. He was a member of the Elk�s Lodge #902, Holyoke Lodge of Masons, The Melha Shrine Temple, a longtime member of the Melha German Band, the Melha Concert Band, the Shrine Military Band, the Holyoke Senior Band as well as Len Abbey�s Kingsmen. He is survived by his life partner of over 30 years, Joan Sadakierski of Holyoke; his two sons Douglas Abbey and Marie of South Hadley; Russell Abbey of South Hadley and seven adored grandchildren: Brianna Abbey, Logan Abbey, Matthew Crowner, Allison Crowner, Jonathan Crowner, Katie Sadakierski, Jenna Sadakierski. He also leaves behind several nieces, nephews, extended family member and friends including his dear friend, Tom Suchenicz. Leonard was also predeceased by his daughter, Cynthia Abbey in 1973, his wife, Barbara (Boudreau) Abbey in 1983 and by his two brothers, Wellington F. Abbey, Jr and Richard H. Abbey. Life celebration hours will be held on Tuesday, August 29, 2017 from 4-7PM at Messier Funeral Home, 1944 Northampton St., Holyoke, MA 01040. A funeral home service will be celebrated on Wednesday, August 30, 2017 at 10AM in Messier Funeral Home and be followed by the burial in Calvary Cemetery, Holyoke. In lieu of flowers, memorial donations in Leonard�s name may be made to the Shriners Hospital, 516 Carew St., Spfld, MA 01104. Please visit www.messierfuneralhome.com for more details. $(document).ready(function(){ var ifr = $("#07s00357259x55e0"); ifr.data("ratio", ifr.attr("height")/ifr.attr("width") ); ifr.removeAttr("width").removeAttr("height"); // Resize the iframes when the window is resized $(window).resize(function(){ var width = ifr.parent().width(); ifr.width(width).height(width * ifr.data("ratio")); }).resize(); });

LEONARD G. ABBEY 1925 - 2017 HOLYOKE- Leonard Abbey, 92, heard the call of the last trumpet on Wednesday, August 23, 2017 and entered eternal rest and peace. He was an accomplished musician who donated much of his time sharing his love of music... View Obituary & Service Information

The family of Leonard Guy Abbey created this Life Tributes page to make it easy to share your memories.

Send flowers to the Abbey family.