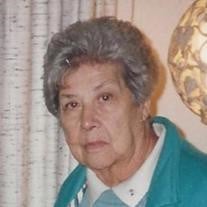 EASTHAMPTON- Lauretta Marie (Breton) Splaine, 91, of Easthampton passed away January 6, 2013 at The Overlook in Northampton. She was born in Fall River, MA on May 22, 1921 a daughter of the late Joseph and Eugina (Berube) Breton. Lauretta was active in every community where she lived, dedicating time with the Girl Scouts in Easthampton and in Europe, March of Dimes, Cub Scouts, VFW Ladies Auxiliary and the NCO Club. Lauretta was primarily a homemaker and community leader but worked also worked for over 21 years at Belchertown State School as a caretaker and aide. She is survived by her beloved husband of 52 years, James F. Splaine of Easthampton; two sons, Michael A. Splaine and his wife Diane of Granby, MA; John Pestana and his wife Karen of Venice, FL; a daughter, Eleanor L. Tennyson and her husband Brian Sr., of Goshen, MA; 4 grandsons, John David Pestana of Boston; Kevin Pestana of Salem, MA; Brian J. Tennyson Jr., of Goshen; Christopher R. McCallum of S. Hadley, MA; 5 great grandchildren and several nieces, nephews and extended family members. Visiting hours will be held on Friday January 11, 2013 from 11AM until 1PM at Messier Funeral Home, 1944 Northampton St., Holyoke, MA 01040 with a funeral home service at 12:30PM. The burial will be at a later date in the Massachusetts Veterans� Memorial Cemetery, Agawam. Memorial donations in Lauretta�s name may be made to Hospice Care at the Overlook, 282 River Rd., Northampton, MA 01060, Holyoke Hospital, 575 Beech St., Holyoke, MA 01040 or to the National Kidney Foundation, 129 Morgan Dr., Norwood, MA 02062.

EASTHAMPTON- Lauretta Marie (Breton) Splaine, 91, of Easthampton passed away January 6, 2013 at The Overlook in Northampton. She was born in Fall River, MA on May 22, 1921 a daughter of the late Joseph and Eugina (Berube) Breton. Lauretta was... View Obituary & Service Information

The family of Lauretta M. Splaine created this Life Tributes page to make it easy to share your memories.

Send flowers to the Splaine family.