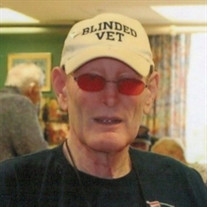 Kevin T. Whalen 1947 - 2017 EAST LONGMEADOW- Kevin Thomas Whalen passed away peacefully on December 15, 2017 surrounded by his family at Holyoke Soldiers� Home. He was born and raised in East Longmeadow, educated in local schools and was a 1967 graduate of East Longmeadow High School. Kevin served honorably in the US Navy from May 1967 to 1971 as a Hospital Corpsman and continued his service in the Naval Reserves until 1976. Kevin worked as an Optician at Petersons Optical in Holyoke of which he became manager and eventually owner. He will be remembered as a social, outgoing friendly person with a great sense of humor. He enjoyed sports, gardening and music. He lost his vision twenty years ago and through the VA was able to learn a complex computer program for the visually impaired. He served as President of the Massachusetts Blind Veteran Association and shared his knowledge and experience with the visually impaired while residing at the Soldiers� Home. Kevin was a determined, resilient man who faced many health challenges with great courage and integrity. He had a big heart and reached out to help anyone he could. Kevin leaves his beloved mother, Jane Shawn of Wilbraham; three sisters, Susan Fenn and her husband Clark of East Longmeadow, Maureen Bushior of Wilbraham, Judy Whalen of East Longmeadow and a brother Kent Whalen and his wife Lina of Naples Florida. He is survived by 2 children, Brenna Whalen of Enfield CT and Gina Bellinger of Hudson MA. He also leaves 8 grandchildren, Jessica, Justin, Heather, Zack, Tyler, Kayla, Sean and Faith, as well as 3 great-grandchildren, Kylar, Abigail and Aiden and many nieces and nephews. He was predeceased by a daughter Kimberly Plantanitis and by his father Thomas J. Whalen. He was also predeceased by his best friend and seeing eye dog, Orville. The Family would like to thank the staff and volunteers at Wingate of Wilbraham, Baystate Medical Center, Hospice Life Care and the Soldiers Home of Holyoke for their skilled and compassionate care. Donations in his memory can be made to the Blind Veterans Association125 N.West St., 3rd FL, Alexandria, VA 22314. Services for Kevin will be held in the chapel of the MA Veterans Cemetery, 1390 Main Street, Agawam, MA 01001 on January 19, 2018 at 1PM. Please visit www.messierfuneralhome.com for more details.

The family of Kevin T Whalen created this Life Tributes page to make it easy to share your memories.