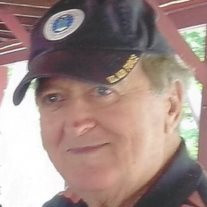 Kenneth �Ken� N. Koontz1935-2014BELCHERTOWN-Kenneth �Ken� N. Koontz, 79, passed away on August 4, 2014 at his home in Belchertown. Ken was born in Somerset, PA on July 18, 1935, a son of the late Norman and Alverta (Yutzy) Koontz. He was a proud veteran of the United States Air Force. Ken worked as a truck driver with multiple companies including Sonoco, Consolidated Freight, and retired from Penske. He was a member of the Belchertown VFW and the Teamsters Union. Ken was a family man, devoted and hardworking father of eight children and loved his grandchildren. In his spare time, Ken enjoyed sitting in his garage, listening to country music, and riding his John Deere mower. Everyone who knew Ken will miss his smile and great sense of humor. He is predeceased by his daughter, Teresa Ventris in 2011 and his brother Norman Koontz. Ken is survived by his loving wife, Sylvia (Thibault)Koontz; seven children, Wanda Cote and her husband Jerry, Lynn Koontz, Kenneth Koontz Jr. and his wife Lea, David Koontz, Tina Buel and her husband David, Patricia Liardi and her husband Dominic, and Jackie Ferrier; nine grandchildren, Ken III, Michelle, Jessica, Krystal, Erika, Ryan, Chelsea, Zachary and Joseph; and several great-grandchildren. He is also survived by his sister Dolores Wise; his brother Raymond Koontz; and several nieces and nephews. Services for Ken will be Monday, August 11 beginning at 11AM at Messier Funeral Home, 1944 Northampton St, Holyoke, followed by a Liturgy of Christian Burial at 12 noon at Our Lady of the Cross, 23 Sycamore St, Holyoke, and burial at the Massachusetts Veteran�s Memorial Cemetery in Agawam. Calling hours will be Sunday, August 10 from 2-5PM at the funeral home. Memorial donations may be made in Ken�s memory to the American Diabetes Association, PO Box 11454, Alexandria, VA 22312. For additional information, please visit www.messierfuneralhome.com. You are using an outdated web browser that does not support this video. Your browser does not support this video format. You should be able to view it in Chrome, Safari or Internet Explorer. $(document).ready(function(){ if ( false === supports_h264_baseline_video() ) { $("#vdfmtnt").show(); $("#vidplyr1").hide(); } });

The family of Kenneth Koontz created this Life Tributes page to make it easy to share your memories.

Send flowers to the Koontz family.