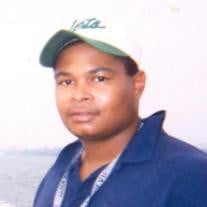 KENNETH GARY JENNINGS 1971 � 2010 HOLYOKE- Kenny Jennings, 39, passed away unexpectedly on Thursday, August 19, 2010 in Somersworth, New Hampshire. Kenny was born in Springfield, MA on April 30, 1971 and was educated in the Holyoke School System. Kenny attended Morgan and Donahue Elementary Schools, Peck Junior High School and was a proud 1989 graduate of Holyoke High School. Kenny was a four year athlete in the HHS Football program, and proudly wore the # 36 jersey that his uncle, James �JJ� Jennings, former NFL player donned in his formidable years at the high school. Kenny also was a 3 year baseball and basketball player for the Knights. KJ was elected to serve as the Junior Class President. He was always drawing and sketching, and became quite an avid artist. His artwork is displayed in Holyoke businesses and he even created his own character, Strumford. Kenny furthered his education locally at Holyoke Community College and later graduated from The University of Massachusetts in Amherst with a B.A. degree in History in 2001. Most recently, Kenny was employed by the City of Holyoke as a substitute teacher and was working at his alma mater, Holyoke High School. Kenny was an avid sports fan and was a dedicated Red Sox and New York Jets fan. Kenny will be missed dearly by his mother, Gaye A. Jennings of Holyoke who mourns his death. He also leaves his grandfather, �Papa George� Jennings of Pompano Beach, FL and his great uncle, Henry Jennings of Holyoke. In addition to his uncle �JJ� Kenny leaves his uncles Robert of South Hadley and George Jennings of Florida. Kenny is survived by three loving sisters, Tina Jennings of Valdosta, GA; Lisa Jennings Sanders of Middletown, CT and Kimberly Jennings of Columbus, GA. He also leaves a brother in law, Leonard A. Sanders of Middletown, CT. Kenny�s adored nieces and nephews include, Andrew, David, Marcia and Thomas Cooke; Karena Jennings, Keyon Tumblin, Keyshawn Tumblin; Keyandra Hawley, Shatiera Tumblin, Alyah Tumblin and his great nephew, �little man�, Lonnie Fredricks and many cousins. A funeral ceremony will be held on Saturday, September 18, 2010 at 6:00 PM in the Messier Funeral Home, 1944 Northampton St., Holyoke, MA 01040. Friends and family are asked to visit on Saturday, September 18, 2010 from 5:00-6:00 PM and join together for the ceremony at 6:00 PM. The burial will be private. The Kenny Jennings memorial fund is still accepting donations directly to Gaye Jennings 582 South Summer St, Holyoke, MA 01040 to help pay for funeral expenses. Memorial donations can also be made to continue Kenny�s memorial tribute webpage.

The family of Kenneth Gary Jennings created this Life Tributes page to make it easy to share your memories.

Send flowers to the Jennings family.