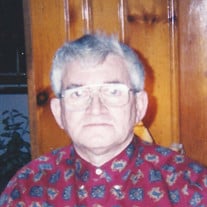 Joseph William Rene Chagnon 1937-2017 HOLYOKE- Joseph Chagnon, 79, better known as Bill to close family and friends passed away at Baystate Medical Center, Springfield, MA due to heart failure on Saturday April 22, 2017. Bill was born in Holyoke, MA but lived in Springfield until he was eighteen, when he and his family moved back to Holyoke. He was the son of the late Theodore (Ted) and the late Lucienne Proulx Chagnon. He is also survived by a sister Rita. He was previously employed as a metal fabricator for E. H. Friedrich Co. for over 30 years before retiring. He served in the National Guard for four years and also served in the Air Force for four years where he was stationed in Presque, Maine. Returning to Holyoke where he married his wife Carol J Fleming. They lived in Holyoke on Lyman St for thirty years where they brought up their three children. He is survived by his three children: Renee M Chagnon and her four children; Samael Jr, Andrew, Amanda from Holyoke and Stephanie and his great granddaughter Cora of Westfield; Scott Chagnon and his wife Karin and their two sons, Joseph and Christopher of Norfolk, VA; Joel Chagnon and his wife Melissa and their two children, Briana and Zacharia of Athol. He was a Scout Leader and trained many leaders over 25 years, Holder of Wood badge beads and received District Award of Merit. His hobbies were hiking, camping, making puzzles and spending time with family. He resided for the last three years with his wife Carol and daughter Renee in Athol, MA until his passing. He is survived by many nieces and nephews and many good friends and family. He will be sadly missed and loved forever by everyone who knew him. Visiting hours will be Thursday, April 27, 2017 from 4-7PM at Messier Funeral Home, Holyoke. A funeral home service will be celebrated on Friday, April 28, 2017 at 12:15PM and followed by the burial with military honors in the Massachusetts Veterans� Memorial Cemetery, 1390 Main St., Agawam. In lieu of flowers memorial donations in Bill�s name can be made the American Heart Assoc., PO Box 417005, Boston, MA 02241-7005. Please visit www.messierfuneralhome.com for more details.

The family of Joseph William Rene Chagnon created this Life Tributes page to make it easy to share your memories.