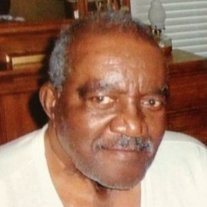 HOLYOKE- Johnnie �Luck� Hardrick, 81, passed away on Nov. 25, 2013 at Holyoke Medical Center. He was born in Americas, GA on July 11, 1932 a son of the late Fletcher and Pearlie (Easley) Hardrick. He was a longtime photo processing clerk for the US Air Force and retired after 20 years of service. He was also the owner of Lucks Paradise on Sargeant St. and the Red Roof on Main St. both in Holyoke. Luck was active in the community for many years and would always take care of the neighborhood kids at his annual Christmas and Easter parties. He is survived by his wife, Cynthia Forest Hardrick of Holyoke; five sons, Earl Hampton, Cedrick Hardrick, Craig Hardrick, Travis Hardrick, Lincoln Hardrick; 4 daughters, Mary Patti Moye; Cathy Hardrick; Cheryl Hardrick; Theresa Hardrick Gordon many grandchildren and great grandchildren as well as several nieces, nephews and cousins. He is also survived by his former wife, Alberta Hardrick. Luck now joins his children, Albert Hardrick, Aaron Hardrick, Brenda Hampton, Harlem Hardrick and his great grandchildren, Keogh Collins and Marquisa Guest who have entered into eternal peace and rest and welcome Luck with loving arms. Visiting hours will be held on Tuesday, Dec 3, 2013 from 10-12noon at Bethlehem Baptist Church, 304 Elm St., Holyoke. A funeral service will be held at 12 Noon and be followed by the burial with full military honors at the MA Veterans� Memorial Cemetery, Agawam. Memorial donations in kind may be made to the funeral home in �Luck�s� name. Please visit www.messierfuneralhome.com for more details.

The family of Johnnie Lee Hardrick created this Life Tributes page to make it easy to share your memories.

Send flowers to the Hardrick family.