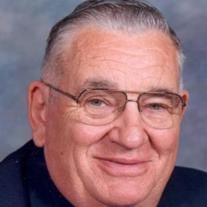 WEST SPRINGFIELD- John F. Miles, aged 75 of West Springfield, MA, died peacefully at Baystate Medical Center surrounded by his loving family. Born in Holyoke, MA on April 2, 1935, he was the son of Edwin F. and Katherine (Goss) Miles. He was educated in the public schools and graduated from Holyoke High School in 1953. He joined the U.S. Air Force and served in the medical corps for more than three years in Saudi Arabia, French Morocco, and Texas. After leaving the service, he graduated from Nichols Junior College in Dudley, MA. His career in fine paper sales spanned 34 years, most of which was spent in the Hartford/Springfield area for the Rourke-Eno Paper Co./ IKON retiring in 1994. John was an avid sports enthusiast. He played football in high school, in college, and semiprofessionally in Holyoke. He loved fishing, hunting, and competition skeet shooting. In retirement, he took up woodworking as well as genealogy. His genealogy hobby took him all over the Northeast to document his research and cemetery findings. He was a member of the Ramapogue Historical Society in West Springfield, and he transcribed and edited an ancestor�s Civil War diary. He was a member of the Mittineague Congregational Church in West Springfield, MA for 44 years. He is survived by his wife of 48 years, Gertrude (Meyer); his son John of Longmeadow, MA; his sister Katherine Washburn of South Hadley, MA; and several nieces and nephews and their families. Calling hours at Messier Funeral Home, 1944 Northampton St, Holyoke, MA will be held Sunday from 4 PM until 7 PM. A private funeral will be held at the convenience of the family. Burial will be in Forestdale Cemetery, Holyoke, MA. Memorial contributions may be made to the American Lung Association, 393 Maple St, Springfield, MA, 01105; or to the charity of one�s choice.

The family of John F. Miles created this Life Tributes page to make it easy to share your memories.

Send flowers to the Miles family.