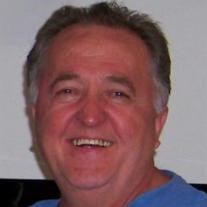 JOHN P. LUKOMSKI SR. LUKOMSKI-John Paul Lukomski Sr., 60, passed away on March 25, 2012. A lifelong resident of Holyoke born on November 28, 1951, John was a beloved and devoted husband and father. John was a kind, caring and lovable person always looking to help others. John is survived by his wife and soul mate of over 31 years, Pamela J. Murnock Lukomski and their loving son, John Paul Lukomski Jr. who both love him very much. John was predeceased by his 14 year old daughter, Stefanie Joanne Lukomski. John is also survived by his sisters, Angie Maziarz and Bernice Kusyk, both of Holyoke; his brothers, Andrew of South Hadley, William of Chicopee and Louis of California, along with many nieces, nephews and friends. John was also predeceased by parents Bronislaw and Stefania (Sawicki) Lukomski, along with brothers Stanley and Edmund; and sister, Kazia Sugrue. John leaves behind a legacy of life � between the countless people he has touched and the family he loved so much, he will be remembered for the selfless giving of himself and his time. John adored his family � as the youngest of nine children he was able to connect with his nieces and nephews at an early age that primed him to become a real �family man�; and eventually love, cherish and care for two children of his own alongside the love of his life, Pam. John met the definition of the word charitable. After the passing of their daughter Stefanie due to brain cancer, John, along with his wife Pam and their son John Jr., annually sponsor a Barbie Doll Drive in her memory, bringing a smile to children in need at local hospitals and at the Mass Commission for the Blind. John also volunteered at the Hospice Life Care holiday gift wrap booth over the years. Along with his wife, John frequently donated food, books, clothing and other essential items to children who are sick, visually impaired, in need or homeless � always in memory of Stefanie. John always loved spending time with his family. He was an avid bowler and Scrabble player and also enjoyed playing poker and pinochle with his family and friends as well as watching TV, movies and game shows with his wife and son. He also enjoyed going to tag sales, taking long walks with his wife, doing yard work and other projects in and around the house � he was always the handyman! John was quite the cook as well, known especially for his delicious pierogi and golumbki! John graduated from Mater Dolorosa and Holyoke High School; and attended Holyoke Community College. He was a communicant of Our Lady of the Cross Parish. Over the past 35 years, he had worked for Northeast Wire, Major Wire and Knight Machine & Tool Co. A �Celebration of Life� in John�s honor will be held Sunday, April 1, 2012 at 3pm at Summit View on Route 5 in Holyoke. Family and friends are welcome to attend and share their memories of John and celebrate the wonderful life he led. In lieu of flowers, memorial contributions may be sent to the family at 44 Rugby Street, Holyoke, MA 01040.

The family of John Lukomski created this Life Tributes page to make it easy to share your memories.

Send flowers to the Lukomski family.