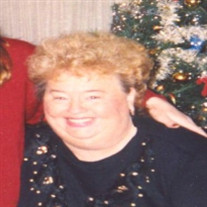 JEAN D. TAUSCHER 1934 � 2008 HOLYOKE � Mrs. Jean D. �Meme� (Tanguay) Tauscher, 74, a forty seven year Holyoke resident, died at Heritage Hall West in Agawam on Thursday, July 31. She was born in Chicopee on July 28, 1934, a daughter of the late Hector and Florence (Cote) Tanguay. She attended local schools and was previously employed at the American Advertising Company. Jean loved BINGO and camping and was a member of the PV8, Pioneer Valley Chapter 8 Camping Club. She was also an accomplished portrait and landscape artist, working with oils and acrylics and a published poet as well as writing lyrics for songs. She is survived by her beloved husband of fifty eight years, Robert O. Tauscher Sr., two daughters, Debra Johnson of Springfield, and Terrie Dickinson and her husband Jan of Westfield. She also leaves two sisters, Barbara Lobudek, and Patricia Gagne, both of Southampton. She will be sadly missed by six grandchildren, nine great grandchildren, and several nieces and nephews. She was predeceased by her son Robert O. Tauscher, Jr. in 1984 and her brother, Robert Tanguay. The funeral procession will form at 8am on Tuesday, August 5 at the Messier Funeral Home, 1944 Northampton St. (Route 5) Holyoke, followed by a funeral home service at 8:30am. The committal service will follow at the Massachusetts Veterans Memorial Cemetery Chapel, 1390 Main St. in Agawam. Calling hours at the funeral home are Monday, August 4 from 4 � 8pm. Contributions in Jean�s memory may be directed to the American Heart Association, 20 Speen St., Framingham, MA 01701. Please visit www.messierfuneralhome.com for an online guestbook. Messier Funeral Home 532-7711

The family of Jean D. Tauscher created this Life Tributes page to make it easy to share your memories.

Send flowers to the Tauscher family.