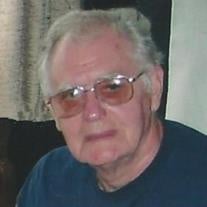 EASTHAMPTON - James Francis Splaine, 79, a longtime resident of Easthampton, passed away Saturday, Sept. 26, 2015, at Cooley Dickinson Hospital in Northampton.He was born Oct. 24, 1935, in Roxbury, a son of the late James R. and Eleanore (Bearse) Splaine and was a graduate of Boston Technical High School in 1952. He served honorably in the U.S. Air Force retiring as a staff sergeant after a 23 year commitment to our country and received numerous awards, citations and medals for outstanding service.He worked at Kollmorgen for several years and as a machinist in the engineering department at National Nonwovens for 20 years. He was a Cub Scout and Boy Scout leader in Germany, and Nebraska, and enjoyed camping, fishing and hunting and was an avid Red Sox and Patriots fan. He was a member of the Florence VFW Post #8006 and a member of the American Legion.James was predeceased by his wife of 52 years, Lauretta (Breton) Splaine in 2013. He is survived by his son Michael A. Splaine and his wife Diane of Granby; a step-son John Pestana and his wife Karen of Venice, Florida; his daughter Eleanor L. Tennyson and her husband Brian of Goshen; four grandsons, John David Pestana of Dorchester, Kevin Pestana of Salem, Brian J. Tennyson, Jr., of Goshen, and Christopher McCallum of South Hadley; and five great-grandchildren. He also leaves a brother Robert Splaine and his wife Alice of Phoenix, Arizona, and several nieces, nephews and extended family members.Visiting hours will be held Thursday, Oct. 1, from 11:15 a.m. to 1 p.m. at Messier Funeral Home, 1944 Northampton St., Holyoke, MA 01040, with a funeral home ceremony at 1 p.m. The Rite of Committal and burial with military honors will follow at 2 p.m. in the chapel of the Massachusetts Veterans' Memorial Cemetery, 1390 Main St., Agawam.In lieu of flowers, memorial donations can be made to the Air Force Sergeants Association, 5211 Auth Road, Suitland, MD 20746

The family of James Splaine created this Life Tributes page to make it easy to share your memories.

Send flowers to the Splaine family.