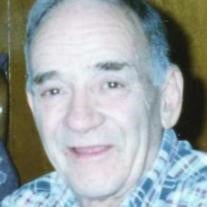 James J. Paolucci, Sr. 1928 � 2010 Chicopee � James J. �Jim� Paolucci, Sr., 81, died on Monday, March 15, with his beloved family by his bedside at the Holyoke Medical Center. Jim was a forty one year Chicopee resident. He was born in Holyoke on May 27, 1928, the son of the late Eusebio and Carolina (Graziani) Paolucci. He attended local schools and proudly served in the U.S. Army during WWII. He retired in 1992 from the former Acme Chain Co. of Holyoke after thirty one years of service. He was a member of the Italian Progressive Society of Holyoke and enjoyed life to its fullest. He was an avid outdoorsman, loved to play pitch, pool, dine out and a fan of the Boston sports teams. He was the husband of the late Rita (Labbe) Paolucci who died on August 4, 1994. He is survived by two sons, Steven and his wife Lori of Agawam, and James Jr. of Chicopee, two daughters; Linda Lussier and her husband Bruce Sr. of Easthampton, and Catherine Cox and her husband Robert of Chicopee. He also leaves his sister, Franka Mytocowicz of South Hadley, and will be sadly missed by seven grandchildren, J. Paolucci, Nico Paolucci, Courtney Cox, Marissa Cox, Emily Lussier, Bruce Lussier, Jr., and Isaiah Harris. He was predeceased by his sister, Mary Zimmerman. Funeral services are on Thursday, March 18 at 10:45am from the Messier Funeral Home, 1944 Northampton St. (Route 5) Holyoke, followed by a Liturgy of Christian Burial at 12noon at St. Anne�s Church, College St. in Chicopee. Burial will follow in Notre Dame Cemetery in South Hadley. Calling hours at the funeral home are on Wednesday, March 17 from 4 to 7pm. The family would also like to extend special thanks to Jim�s caregivers for their support, Rose, Corrine, Rochelle, Jenn, Kelly, and Nancy. In lieu of flowers memorial contributions may be directed to the Massachusetts Commission for the Blind, Springfield Office, 436 Dwight St., Springfield, MA 01103.

The family of James J. Paolucci Sr. created this Life Tributes page to make it easy to share your memories.

Send flowers to the Paolucci family.