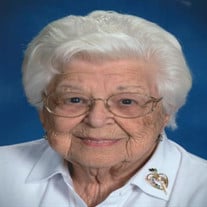 Helen A. D�Amour1920-2015LONGMEADOW- Helen A. Sheehan D�Amour, 94, of Longmeadow died May 11, 2015. Born in Swampscott, MA, she was a daughter of the late Aldis E. Flint & Gertrude A. (Guillot) Flint. Helen was a pioneer for women in the banking industry. Beginning her career in 1937 at the First National Bank of Amherst, she moved to Holyoke National Bank in 1943 holding several positions over the years, retiring as an officer of the bank in 1983. A graduate of Amherst High School, She attended the American Institute of Banking receiving two certificates. She is a graduate of the Graduate School of Banking at the University of Wisconsin, and a graduate of the school of Management at Ball University- Indiana. She served as Springfield Chapter President of the American Institute of Banking; she also served The National Association of Bank Women of Pioneer Valley as Chairperson and National Vice-President for the N.E. Region. She was a member of the Bank Administration Institute, served on the Salvation Army advisory Board & Simmons College advisory board. She was a long time member of the Holyoke chamber of commerce, Holyoke Quota Club and member of the Pioneer Valley Business & Professional Women. Helen was a longtime loyal supporter and volunteer at Elms College, having served in the development office over several decades, she was a past member of the board of trustees, an honorary doctorate recipient and recipient of the Via Veritatis medal, presented to outstanding Catholic Women who have made a significant contribution to society. She was a communicant of St. Mary�s Church in Longmeadow and a long time volunteer for her church. Helen was an avid golfer and loved to travel and paint. Helen was predeceased by her loving husband Paul H. D�Amour. She will be sorely missed by her daughter, Barbara Sbrega, of Holyoke, MA; granddaughter Helen Marie LaPointe and husband Gary; great grandchildren, Ashley, Allison & Jamie Lapointe; and step-son Donald D�Amour and his wife Michele. She leaves five step- grandchildren, Michael D�Amour & wife Jennifer, Nicole D�Amour Schneider & her husband Todd, Mathieu D�Amour & wife Nicole, Philip D�Amour & wife Stacie, Danielle D�Amour-Hernandez and her husband Otto. She also leaves 10 step-great grandchildren. Services for Helen will be on Friday, May 15 beginning at 8:15AM in the Messier Funeral Home, 1944 Northampton St, Holyoke, followed by a liturgy of Christian burial at 10AM in St. Mary�s Church, 519 Longmeadow St, Longmeadow, MA, and burial in St. Jerome Cemetery in Holyoke. Calling hours will be Thursday, May 14 from 4-7PM in the funeral home. A special thanks to all the many doctors, nurses, and medical technicians whose warmth and compassionate care made it easier for Helen to endure her many tests and procedures. A very special thanks to Helen�s friends, whose many kindnesses Helen so much appreciated in her later years, especially to Kathy Neitupski and to Monica Guerra, loyal and loving friend and care-giver. Memorial contributions may be made in Helen�s name to Elms College, 291 Springfield Street, Chicopee MA. 01013.

The family of Helen A. D'Amour created this Life Tributes page to make it easy to share your memories.

Send flowers to the D'Amour family.