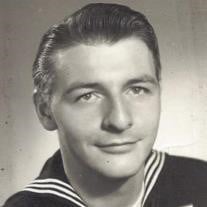 HOLYOKE- Gerard R. Belisle, 80, died Monday, July 27, 2015 at the Holyoke Soldier�s Home. Gerard was born in Holyoke on April 4, 1935, a son of the late Emile and Wilhemine (Cote) Belisle and was educated in Holyoke Schools. He was a Navy Veteran of the Korean War and retired after 27 years from Holyoke Machine. Gerard is predeceased by three brothers, Rene, Harvey and Steve Belisle. He leaves his wife of almost 60 years, Stella (Zielenski) Belisle; eight children, Christine A. Johnson of Springfield, Michael G. Belisle and his wife Suzanne of Centerville, OH, Dennis A. Belisle and his wife Kassanda of Bristol, CT, Daniel J. Belisle and his wife Janet of San Antonio, TX, Deborah J. Talbot and her husband Daniel of South Hadley, David P. Belisle and his wife Mary of Holyoke, Joseph A. Belisle of South Hadley and Robert J. Belisle of South Hadley; 10 grandchildren; 2 great-grandchildren; a brother, Leo Belisle of Chicopee; and several nieces and nephews. There will be no calling hours. A Liturgy of Christian Burial will be held on Monday, August 3, 2015 at 11:15AM at Immaculate Conception Church, 54 North Summer St in Holyoke, followed by burial in MA Veteran�s Memorial Cemetery in Agawam. In lieu of flowers, donations may be made to the Soldier�s Home, 110 Cherry St, Holyoke, MA 01040. For additional information, visit www.messierfuneralhome.com.

The family of Gerard R. Belisle created this Life Tributes page to make it easy to share your memories.