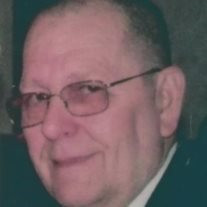 HOLYOKE- Gerald L. Carriere, 70, passed away on Monday, May 5, 2014 at Wingate at South Hadley after a long fight with melanoma cancer. He was born in Burlington, VT on March 18, 1944 a son of the late Norman and Alice (Lucia) Carriere and attended local schools graduating from Dean Vocational. Gerald worked for 25 years with Digital Equipment Corp in Westfield and later completed his working career at John F. Kennedy Middle School in Northampton as a custodian. He was an outdoorsman and enjoyed fishing and hunting with his sons and vacationing with his family on Cape Cod. He was a communicant of Our Lady of The Cross Parish. A proud veteran in the U.S. Army, Gerald served in the Massachusetts National Guard for 35 years, starting in Chicopee in 1962 and ending his years of dedicated service in Florence, MA as a Staff Sergeant in the Massachusetts National Guard Army Corps of Engineers. He is survived by his beloved wife of over 50 years, Pauline (Demers) Carriere of Holyoke; four sons, Kenneth Carriere and his wife Jennifer of Pittsfield; Bernard Carriere and his wife Christina of Springfield; Jeremy Carriere and his wife Elizabeth of Granby, MA; Charles Carriere and his significant other Kelly Puza of Southampton; 11 grandchildren and three great grandchildren. He also leaves a brother in law, Donald Demers of Plainfield, MA; two sister in laws, Carol Demers of Grovetown, GA; Crystal Demers of Belchertown, MA and several cousins including Suzanne Cole of Holyoke. Visiting hours will be held on Thursday, May 8, 2014 from 4-7PM at Messier Funeral Home, 1944 Northampton St., Holyoke, MA 01040. His funeral will begin at 11:15AM on Friday, May 9, 2014 from the funeral home and be followed a Liturgy of Christian Burial at 12:30PM in Our Lady of The Cross Church, Holyoke. The Rite of Committal and Burial with military honors will follow at 2PM in the chapel of the Massachusetts Veterans� Memorial Cemetery, Agawam. In lieu of flowers, if friends desire, memorial donations in Gerald�s name can be made to St. Jude�s Children Hospital, 501 St. Jude Place, Memphis, TN 38105-1905

HOLYOKE- Gerald L. Carriere, 70, passed away on Monday, May 5, 2014 at Wingate at South Hadley after a long fight with melanoma cancer. He was born in Burlington, VT on March 18, 1944 a son of the late Norman and Alice (Lucia) Carriere and attended... View Obituary & Service Information

The family of Gerald Carriere created this Life Tributes page to make it easy to share your memories.

Send flowers to the Carriere family.