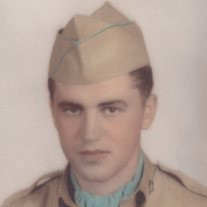 West Suffield, CT-Frederick Alfred Joy, 84, a lifelong West Springfield resident passed away on Saturday, January 16, 2016. Frederick served his country during Korea in the United States Army. He was born in West Springfield on December 17, 1931 a son of the late Frederick M. Joy and Mary (Warzenski) Joy and educated in West Springfield Schools. After his service he attended and graduated from Penn State with a Master�s Degree in Electrical Engineering. Frederick worked for many years at the West Springfield Post Office. He enjoyed dancing, antique cars, and attending car shows. He is survived by his Loving Sister and care taker, Catherine Bovee and her husband Bob of West Suffield, CT; Nephews, Nick Bovee and Melinida Miller of Suffield, CT; Derrick Bovee and Laura of Enfield, CT; Alicia Bovee of Windsor Locks, CT wife of Stephen Bovee whom he was predeceased by, his great niece, Renee Bovee of Windsor Locks, CT; and his extended family and dear friends. Services for Frederick will be Thursday, January 21, 2016 beginning with calling hours from 10AM-12PM in the Messier Funeral Home, 1944 Northampton Street, Holyoke, and Followed by a Funeral Home Service at 12PM. The burial with military honors will be in Forestdale Cemetery, Holyoke, MA. Memorial donations in Frederick�s name may be made to American Cancer Society 30 Speen Street, Framingham, MA 01701. Please visit www.Messierfuneralhome.com for more details.

The family of Frederick Alfred Joy created this Life Tributes page to make it easy to share your memories.

Send flowers to the Alfred family.