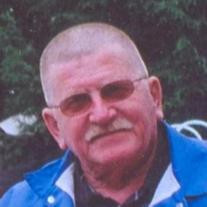 Eugene F. Reynolds, Jr. 1941-2011 Chicopee- Eugene Francis Reynolds, Jr., 70, passed away Friday, November 25, 2011, at home. He was born in Pittsfield, September 9, 1941, a son of Agnes (Arasimowicz) and the late Eugene F. Reynolds. In 1967 Eugene graduated from WNEC, where he earned a BA in accounting. He was a self employed certified public accountant who worked out of his home, Eugene F. Reynolds, Jr. PC for many years. Eugene was a member of the Chicopee Tigers A.C. He enjoyed the casino, collecting Diecast model cars and Golfing. Eugene is survived by his son Christopher Reynolds and his wife Leslie of Easthampton; his daughter; Lori Reynolds of Chicopee; two brothers; Michael and David of FL; two sisters; Linda Day and Janet Gerner of FL; his wife; Carol (Seery) Reynolds. He also leaves his beloved cousins of Pittsfield; his extended family and an abundance of friends. Eugene will forever have a special place in hearts and minds of all who knew him to never be forgotten. In lieu of flowers memorial contributions may be made in Eugene�s name, to The American Lung Association, 393 Maple St., Springfield, MA 01105. Visiting Hours will be held on Friday, December 2, 2011 from 4:00 to 7:00 PM at Messier Funeral Home, 1944 Northampton St., Holyoke, MA 01040. The Burial with military honor will be Saturday, December 3, 2011 at 10:00AM at St. Joseph�s Cemetery, 222 Pecks Road, Pittsfield, MA 01201.

The family of Eugene Francis Reynolds Jr. created this Life Tributes page to make it easy to share your memories.

Send flowers to the Reynolds family.