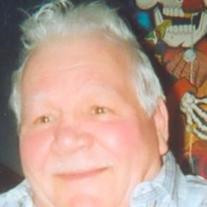 Ernest P. Guilbault 1934 - 2011 HOLYOKE- Ernest P. Guilbault, 76, a longtime Chicopee resident passed away on Friday, March 11, 2011 at Mercy Medical Center. Ernest was born in Holyoke on October 18, 1934 a son of the late Philip Guilbault and Eva Gowash. Ernest was educated in Holyoke Schools and attended Westfield Trade School. Ernest was a longtime Plumber and Pipefitter working for many years at Dennison Avery retiring in 1994 after 25 years of service. Ernest was very active with the Knights of Columbus Council # 4044 in Chicopee where he volunteered in the kitchen and wherever help was needed. Ernest is survived by his wife of 54 years, June Gewinner Guilbault of Chicopee; his two sons, Mark Guilbault of Enfield, CT; Kevin Guilbault of Chicopee, MA; his two daughters, Tami Harmon of Enfield, CT; Jodi Gauthier and her fianc� Frank O�Hagan of Chicopee, MA and will be missed dearly by his seven grandchildren and five great grandchildren. Ernest also leaves behind two sisters, Alexina Schwalm of South Hadley; Rita Mazzolini of New Mexico and several nieces and nephews. In addition to his parents, Ernest was predeceased by a brother, Arthur Guilbault and a sister Jean Powers as well as a grandson, Justin LaJeunesse. Visiting hours will be held on Monday, March 14, 2011 from 4-7 PM at Messier Funeral Home, 1944 Northampton St., Holyoke, MA 01040. His funeral will begin on Tuesday at 9:45 AM from the funeral home and followed by a Liturgy of Christian Burial at 11 AM in St. Ann Church, 30 College St., Chicopee, MA 01020. The burial and Rite of Committal will be in St. Stanislaus Cemetery, 800 Montgomery St., Chicopee. In lieu of flowers, memorial donations in Ernest�s name can be made to a charity of one�s choice. Please visit www.messierfuneralhome.com to share stories, offer condolences and view Ernest�s Life Tribute webpage.

The family of Ernest P. Guilbault created this Life Tributes page to make it easy to share your memories.

Send flowers to the Guilbault family.