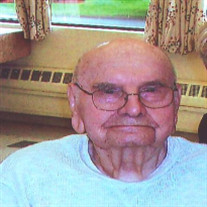 Emery E. Konrad 1919 � 2009 Holyoke � Emery E. Konrad, 90, a lifelong Holyoke resident, died on Wednesday, November 18, in a local nursing home. He was born in Holyoke on June 11, 1919, a son of the late William and Marie (Stallman) Konrad. He attended local schools and proudly served in the U.S. Army during WWII. He was a Purple Heart Veteran, having been wounded during the Battle of the Bulge. He retired after forty years of service from the former Atlas Copco Co. of Holyoke. He was a lifetime communicant of First Lutheran Church. He was the husband of the late Rose C. (Weglarz) Konrad who died on February 10, 2002. He is survived by his son, Wayne and his wife Dolores, and his daughter, Elaine Konrad, both of South Hadley. He also leaves three grandchildren, Kristin Abbott and her husband Mark, Robert Kelley, and Marie Tiffany Kelley, and two great grandchildren, Bryan and Lauren Abbott. He was predeceased by two brothers, William, and Arthur, and four sisters, Lillian King, Erna Ahern, Mary Duquette, and Jean Mielke. Calling hours are Friday, November 20 from 4 � 7pm at the Messier Funeral Home, 1944 Northampton St. (Route 5) Holyoke. Relatives and friends are invited to meet at First Lutheran Church, 1810 Northampton St. (Route 5) Holyoke on Saturday, November 21 for an 11:30am Liturgy of Christian Burial. Burial will follow in Forestdale Cemetery. In lieu of flowers, memorial contributions may be directed to First Lutheran Church and School, 1810 Northampton St., Holyoke, MA 01040.

The family of Emery E. Konrad created this Life Tributes page to make it easy to share your memories.

Send flowers to the Konrad family.