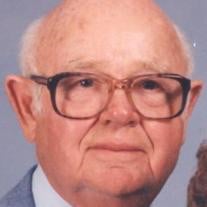 HOLYOKE- Edwin Kallmeyer passed away on December 31, 2011 at the Soldiers� Home in Holyoke where he had lived for the past 19 months. He was born on March 20, 1916 in Holyoke where he lived for his entire life except while serving as a First Lieutenant in the Army Air Corps during World War II. After his discharge from the service, he obtained a degree in Mechanical Engineering at Northeastern University�s Springfield campus and worked as an engineer at American Writing Paper which later became Brown Paper Company where he became chief engineer. Following his retirement, he and his late wife Ethelyn enjoyed traveling to many different parts of the world and spent their winters in Englewood, FL, where he continued to go until 2007. He was an avid gardener who enjoyed growing many different kinds of fruits and vegetables and he also enjoyed playing golf in his spare time. He was a life-long member of First Lutheran Church in Holyoke and he belonged to the Mt. Tom Lodge of Masons where he served as treasurer for several years. He was predeceased by Ethelyn, his beloved wife of over 50 years, and is survived by his son and daughter-in-law, Kurt and Ines, of Colchester, CT as well as many nieces and nephews. Calling hours will be Wednesday January 4, 2012, from 4:00 PM to 7:00 PM at Messier Funeral Home, 1944 Northampton St., Holyoke with as service at First Lutheran Church at 10:00 AM Thursday, January 5. Burial to follow at the Massachusetts Veteran�s Memorial Cemetery, Agawam. In lieu of flowers, memorial contributions may be made to First Lutheran Church and School, 1810 Northampton St., Holyoke, MA 01040, or the Soldier�s Home in Holyoke, 110 Cherry St., Holyoke, MA 01040. Please visit www.messierfuneralhome.com to share condolences, stories, pictures and view Edwin�s personal life tribute webpage.

The family of Edwin Kallmeyer created this Life Tributes page to make it easy to share your memories.

Send flowers to the Kallmeyer family.