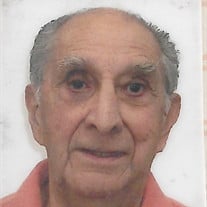 EDWARD P. LeBLANC 1930 � 2017 HOLYOKE- Edward Paul LeBlanc, 87, a longtime Holyoke resident entered into peace, light and tranquility on Tuesday, October 24, 2017 at Renaissance Manor on Cabot. Ed was born in Odanak, PDQ, Canada on April 29, 1930 a son of the late Lionel and Catherine (Launiere) LeBlanc and part of the Abenaki Tribe. He was a 1948 graduate of Holyoke High School and worked for most of his life as a carpenter. He owned and operated Eddie�s Home Improvement for many years retiring in 2002. Prior to that, he worked in his trade for various companies throughout WMass. Edward was a proud US Army veteran having served honorably during the Korean War. He loved woodworking in his spare time as well as being able to fix just about anything. Ed was predeceased by his beloved wife Linda (Jackimek) LeBlanc on May 27, 2011 and by his five siblings. He is survived by his son, Jason LeBlanc and his wife Kimberly of Holyoke; 3 granddaughters, Sydney LeBlanc of Chicopee; Emily LeBlanc of Holyoke and Cara LeBlanc of Holyoke. He will be missed by several nieces, nephews, cousins, extended family members and dear friends. A funeral service with military honors will be held on Tuesday, October 31, 2017 at 1PM in the Chapel of the Massachusetts Veterans� Memorial Cemetery, 1390 Main St., Agawam. In lieu of flowers, memorial contributions in Edward�s name can be made to help our veteran�s at �Soldier On�, 425 North Main St.,Bldg 6, Leeds, MA 01053. Please visit www.messierfuneralhome.com for more details.

The family of Edward Paul LeBlanc created this Life Tributes page to make it easy to share your memories.

Send flowers to the LeBlanc family.