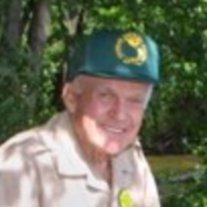 HOLYOKE- Edmund �Dr. Catfish� Partyka, 87, passed away on Friday February 1, 2013 at Baystate Medical Center. Ed was a philanthropist and donated much of his efforts to children�s research and the development of Mater Dolorosa School and Church. He devoted enormous time and efforts to the betterment of people in the community and was instrumental in the cleanup efforts of the Connecticut River. He was awarded the Individual Environmental Award by the City Of Holyoke in 2002 and also received the Environmentalist of the Year Award in 1994. Ed served on the Conservation Commission in Holyoke for many years and could be found at least twice daily walking the riverbanks from downtown to north of the city. He was also known as �Dr. Catfish� to the thrones of people who competed annually in the American Legion Post #351 Catfish Derby. Ed was born in Holyoke on September 26, 1925 a son of the late Paul and Nellie (Sikora) Partyka and was a graduate of Holyoke High School. He spent much of his time along the banks of the river as a young boy, enjoying the wildlife, fishing and boating. He later attended Westfield State Teachers College and enlisted in the U.S. Air Force during WWII serving honorably in the US Army Air Corps. He worked as a supervisor for the Mass Highway Department retiring after completing over 30 years of service. Ed was a member of the Disabled American Veterans, Pulaski Heights Tenants Association and American Legion Post #351 where he served as Sargent of Arms. Ed is survived by several caring nieces, nephews, cousins and dear friends, especially Patricia and Don Carlson of Holyoke; Walter Paul Partyka of South Hadley; Patricia Partyka of Chicopee; Julie Colon of Springfield and Dave Moore of Holyoke. He was also predeceased by his brothers and sisters: Joseph �Joey� Partyka, Walter Partyka, Peter Partyka, Elizabeth Rudzik, Anne Marie Radowski, Mary Smith, Helen Alexopoulos and John Partyka. Visiting hours will be held on Friday, February 8, 2013 from 4-7 PM at Messier Funeral Home, 1944 Northampton St., Holyoke, MA 01040. His funeral will begin on Saturday February 9, 2013 at 10:45AM from the funeral home and followed by a Liturgy of Christian Burial at 12Noon in Our Lady of The Cross Church, Holyoke. The Rite of Committal and Burial will be in Mater Dolorosa Cemetery, South Hadley, MA. If friends desire, memorial donations in Ed Partyka�s name can be made to The Jimmy Fund, c/o Dana Farber, PO Box 849168, Boston, MA 02284-9168 or to The Holyoke Boys and Girls Club, Mt. Tom Program, 70 Nick Cosmos Way, PO Box 6256, Holyoke, MA 01040.

HOLYOKE- Edmund &#65533;Dr. Catfish&#65533; Partyka, 87, passed away on Friday February 1, 2013 at Baystate Medical Center. Ed was a philanthropist and donated much of his efforts to children&#65533;s research and the development of Mater Dolorosa... View Obituary & Service Information

The family of Edmund E. Partyka created this Life Tributes page to make it easy to share your memories.

Send flowers to the Partyka family.