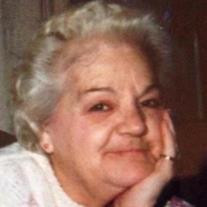 Doris R. (Blanchette) Cusson1923 - 2015HOLYOKE- Doris R. (Blanchette) Cusson, 91, peacefully passed away on October 31, 2015. Doris was born on December 3, 1923 in Northampton, MA to the late Azarias and Georgiana (Fredette) Blanchette. She was the middle child of ten children and throughout her life she remained a devoted sister to all her siblings. Doris is the last surviving member of her generation. Family remained important to Doris throughout her life. Doris made a loving home for her husband Emile Cusson and her two children in Holyoke, MA. Their home was the center of family gatherings and holidays. Doris�s door was always open to any member of her extended family.Doris will be remembered for her love of bingo. Along with her sisters, Doris was regular player at several church and legion bingos in the Holyoke area. She enjoyed bowling. She also enjoyed trips to Foxwoods. Anyone who knew Doris, will remember her as an independent woman who always spoke her mind. She was also known for her wry sense of humor and her easy laugh. Doris is predeceased by her husband Emile Cusson and her daughter Joan Cusson, whose life, at 27, was taken by the hands of her estranged husband. Doris is survived by her son Raymond Cusson and his wife Peggy of Shutesbury, MA; her grandsons Casey Cusson and his wife Stephanie of Shelburne, MA, Corey Cusson of Charlemont, MA; her granddaughter Cara Cusson of Easthampton, MA; her great-grandchildren Jack Cusson, Chloe Cusson, and Bailey Cusson of Shelburne, MA; her brother-in-law Marcel Archambault of Belchertown, MA; and by many nieces and nephews and great-nieces and nephews. She is also survived by her loving friends Shirley Sanchez and son, Angel Sanchez and Carmen Ramos and family. Messier Funeral Home is in charge of the arrangements. There will be a private burial. A gathering to celebrate Doris�s life will be held later in the year. Those who wish to remember Doris are asked to make a donation to Safe Passage, 43 Center Street, Suite 304, Northampton, MA 01060.

The family of Doris R. Cusson created this Life Tributes page to make it easy to share your memories.

Send flowers to the Cusson family.