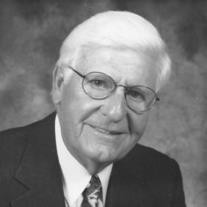 WILLIAMSBURG, VA-Donald E. Lacombe, 90, passed away on January 28, 2015, joining his beloved wife, Virginia (Page) Lacombe. The son of Romeo and Anita (Messier) Lacombe, he grew up on Chestnut St in Holyoke, MA. He graduated from Holyoke High School, joined the Air Force and married his high school sweetheart on January 29, 1949. He achieved the Service�s highest enlist rank of Chief Master Sergeant and retired from the Air Force in 1969 in Colorado Springs, CO. Don and his family returned to make their home in Belchertown, MA and he was appointed to the staff of the University of Massachusetts at Amherst as the purchasing manager for the Campus Center- a post he held for two decades. During his time in Belchertown, Don was an active member of St. Francis parish, serving in a variety of roles, including a Lay Eucharistic Minister. For the last 15 years, he lived in Mesa, AZ, Aiken, SC, and most recently was a member of the community at the Verena at the Reserve in Williamsburg, VA. Don is survived by his five children and their families, Phil and Linda Lacombe of Fairfax Station, VA, Frank and Rachel Lacombe of Auburn, MA, Donna Lacombe of Aiken, SC, Michael and Lynn Lacombe of Williamsburg, VA, and Tom and Pat Lacombe of Niceville, FL; nine grandchildren; and six great-grandchildren. Calling hours will be on Monday, February 2 from 4-7PM in the Messier Funeral Home, 1944 Northampton St, Holyoke. Services will be on Tuesday, February 3, beginning at 9AM in the funeral home, followed by a Liturgy of Christian Burial at 10AM in Our Lady of the Cross Church, 23 Sycamore St, Holyoke, and burial in Notre Dame Cemetery, 63 Lyman St, South Hadley. Memorial donations may be made in Don�s memory to your local hospice association. For additional information, please visit www.messierfuneralhome.com.

The family of Donald E. Lacombe created this Life Tributes page to make it easy to share your memories.

Send flowers to the Lacombe family.