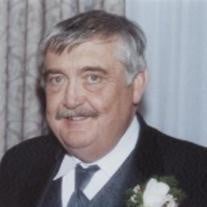 DAVID A. LOUDON 1949-2012 HOLYOKE: David A. Loudon, 63 of Holyoke passed away Saturday, April 7, 2012 at Baystate Medical Center. He was born March 7, 1949 in Springfield, son of the late Raymond & Beatrice (Smith) Loudon. David retired as a Sergeant in 2005 from the Springfield Police Department after 33 years of service. The majority of his career was spent in the Detective Bureau assigned to the Finger Print/Photo Lab. A founding member of the Springfield Police Underwater Search & Rescue Team, David also was a member of the Police Competition Shooting Team, Honor Guard and taught briefly at the Police Academy. After his retirement David worked part time as lot security at STCC. His many hobbies included photography & shooting. He leaves behind his wife of 37 years, Cecelia (Rojko) Loudon of Holyoke; his daughter, Deanna Greenstein and her husband Adam of Brockton, MA; his three grandchildren Damon, Ashton and Sadie Greenstein. He also leaves behind his brother, Reid Loudon of CT and his sister SSJ Maria Louise Loudon of Holyoke as well as extended family members, many dear friends and co/workers. Memorial donations in David�s name can be made to Dakin Pioneer Valley Humane Society, P.O. Box 6307, Springfield, MA 01101 or the American Cancer Society Centralized Memorial Processing Center, 30 Speen St., Framingham, MA. 01701. Visiting hours for David will be held Thursday, April 12th, 2012 from 4-7 PM at Messier Funeral Home, 1944 Northampton Street, Holyoke, MA 01040. His funeral will begin on Friday, April 13th, 2012 at 9:00 am at the funeral home with services beginning at 10:00 AM. The Burial and Rite of Committal will be in Notre Dame Cemetery, Lyman Street, South Hadley. Please visit www.messierfuneralhome.com to share stories, pictures, receive directions and view David�s personal webpage tribute. You are using an outdated web browser that does not support this video. Your browser does not support this video format. You should be able to view it in Chrome, Safari or Internet Explorer. $(document).ready(function(){ if ( false === supports_h264_baseline_video() ) { $("#vdfmtnt").show(); $("#vidplyr1").hide(); } });

DAVID A. LOUDON 1949-2012 HOLYOKE: David A. Loudon, 63 of Holyoke passed away Saturday, April 7, 2012 at Baystate Medical Center. He was born March 7, 1949 in Springfield, son of the late Raymond & Beatrice (Smith) Loudon. David retired as a... View Obituary & Service Information

The family of David Allyn Loudon created this Life Tributes page to make it easy to share your memories.

Send flowers to the Loudon family.