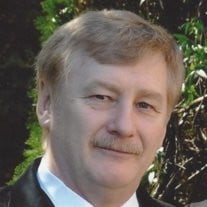 MADRID, SPAIN- David G. Cantin, 63, entered into eternal rest on May 28, 2013 in Madrid, Spain after a long and courageous battle with cancer. David was born in Springfield, MA and raised in Chicopee Falls. He is the beloved son Gerard Cantin who died in December 2010 and Claire (Daviau) Cantin of Holyoke. David was a graduate of Cathedral High School, Class of 1968. After his graduation, he enlisted in the US Marine Corps serving on active duty from 1969 thru 1973. He received the good Conduct Medal and the National Defense Service Medal. When he returned home, he attended and graduated from Western New England College earning a B.A. and an M.B.A. degree. During this time, he also worked as a civilian employee at Westover AFB. He later went to work for Kaman Aerospace in CT and then with General Electric Aerospace in Cincinnati, OH for several years. He joined the Air Force Reserves and he served honorably until completing 21 years of military service. Nineteen years ago, he went to work for European Air Defense Systems, a subsidiary company of Air Bus. He worked in Munich, Germany and Madrid, Spain first as a consultant and later as a project manager until he became ill late last year. In addition to his mother, David is survived by his two beloved sons and their wives; Lt. Jeffrey Cantin and his wife Dr. Rita Mezatesta of Atlanta, GA; Dr. Jason Cantin and his wife Candy Cantin of Austin, TX; his two cherished grandchildren; Henry and Sam Cantin of Austin TX; two brothers and two sisters, Donald Cantin and his wife Lynda of Holden, MA; Daniel Cantin and his wife Carol of So. Hadley, MA; Dr. Denise Cantin of Holyoke; Diane Deshais and her husband Dr. Michael Deshais of Longmeadow. David also leaves his loving partner, Femy Martin of Madrid, Spain. David will be missed by his many nieces, nephews and his former wife, Barbara Schulz of Atlanta, GA. David�s family will greet friends on Friday morning July 26, 2013 from 9:30AM � 10:30AM at Messier Funeral Home, 1944 Northampton Street, Holyoke and be followed by a Liturgy of Christian Burial at 11AM in St. Rose de Lima Church, 600 Grattan St., Chicopee. The Rite of Committal and Burial with military honors will be in St. Rose de Lima Cemetery in Chicopee. In lieu of flowers memorial contributions in David�s name may be made to Griffin�s Friends Children�s Cancer Fund, c/o Baystate Health Foundation, 280 Chestnut St., Springfield, MA 01199. Please visit www.messierfuneralhome.com for more details.

MADRID, SPAIN- David G. Cantin, 63, entered into eternal rest on May 28, 2013 in Madrid, Spain after a long and courageous battle with cancer. David was born in Springfield, MA and raised in Chicopee Falls. He is the beloved son Gerard Cantin... View Obituary & Service Information

The family of David Gerard Cantin created this Life Tributes page to make it easy to share your memories.

Send flowers to the Cantin family.