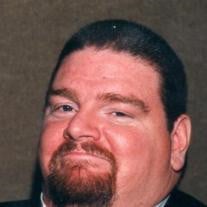 DARREN S. PARADIS 1962 - 2011 MONSON- Darren �Tiny� Stuart Paradis, 48, a longtime resident of Holyoke died on Wednesday, August 10, 2011 at UMass Medical Center in Worcester. Darren was born in Holyoke on September 2, 1962 a son of the late Donald and Elizabeth (Burnett) Paradis and educated in the Holyoke Schools. Darren was an avid sports fan and enjoyed spending time at Cape Cod. Darren is survived by his sister, Tami Kubacki and her husband Joe of Indian Orchard; his brother, David Paradis and his wife Caryn of Hampden. Darren will be missed by his nieces and nephews, Jenn Voyik, Jason Voyik, Avery Paradis, Garrett Paradis and Logan Paradis as well as his extended family and friends who will remember his humor and gentleness. Visiting hours for Darren will be held on Tuesday, August 16, 2011 from 4-7 PM at Messier Funeral Home, 1944 Northampton St., Holyoke, MA 01040. A funeral service and ceremony will be held on Wednesday, August 17, 2011 at 11 AM in the funeral home followed by the burial in Forestdale Cemetery, 304 Cabot St., Holyoke, MA 01040. In lieu of flowers, memorial donations in Darren�s name can be made to the Shriners Hospital for Children, 516 Carew St., Springfield, MA 01104. Please visit www.messierfuneralhome.com to share condolences, pictures, stories and view Darren�s personal webpage and life tribute video.

The family of Darren S. Paradis created this Life Tributes page to make it easy to share your memories.

Send flowers to the Paradis family.