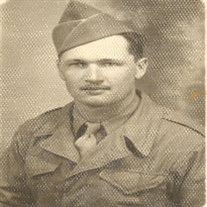 CASIMER S. OPAROWSKI 1920 � 2008 SOUTH HADLEY � Casimer S. �Gabe� Oparowski, 87, died on Wednesday, May 28 at the Holyoke Medical Center. He was born in Adams, MA on September 24, 1920, a son of the late Tytus and Mary (Kogut) Oparowski. He attended schools in Adams and proudly served in the U.S. Army during WWII. He was a thirty five year South Hadley Falls resident and former twenty year Kissimmee, Florida resident. He retired after twenty five years of service as a construction superintendent from Daniel O�Connell & Sons. He was a member of the VFW, Elks Lodge 902 of Holyoke, and a 4th Degree Knight of Columbus at Council 1721 of South Hadley, and K of C Council 6624 of St. Cloud � Kissimmee, Florida. He is survived by his beloved wife of sixty seven years, Mildred (Drobiak) Oparowski. They were married in Adams on November 30, 1940. He also leaves to cherish his memory two sons, Ronald and his wife Kathy of South Hadley, and Richard and his wife Gail of Connecticut, three daughters, Jeanne Oparowski of Chicopee, Carole Wiggin and her husband Wally of Chicopee, and Dorothy Schmitt and her husband James of Florida. He also leaves three brothers, Frank of Oregon, and Theodore and Matthew of Adams, and two sisters, Cecelia Laston of Lanesboro, MA, and Helen Fox of Pittsfield. He will be sadly missed by fourteen grandchildren, thirty six great grandchildren, twelve great-great grandchildren, and several nieces and nephews. He was predeceased by his son, Edward in 1999. He was also predeceased by five brothers, John, Stanley, Walter, Peter,�and Joseph, and three sisters, Sophie Rusek, Mildred Oparowski, and Anna Keeler. The funeral procession will form on Monday, June 2nd at 8:45am from the Messier Funeral Home, 1944 Northampton St. (Route 5) Holyoke, followed by a Liturgy of Christian Burial at St. Patrick�s Church, 30 Main St. South Hadley at 10am. Burial will be at the convenience of the family. Calling hours at the funeral home are Sunday, June1st from 3 -6pm. In lieu of flowers, contributions in Casimer�s memory may be directed to The American Heart Association, 1111 Elm St., West Springfield, MA 01089 or Community Resources for People with Autism, 116 Pleasant St., Suite 366, Easthampton, MA 01027. Please visit www.messierfuneralhome.com for an online guestbook. Messier Funeral Home 532-5491

The family of Casimer S Oparowski created this Life Tributes page to make it easy to share your memories.

Send flowers to the Oparowski family.