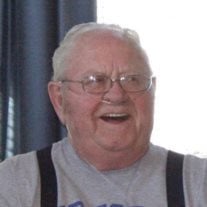 HOLYOKE- Carroll E. Ware, 82, died peacefully on February 13, 2013 at the Holyoke Soldier�s Home surrounded by his family. Carroll was born in Randolph, Maine on February 26, 1931, the son of Hazel James and Clarence Ware. He lived his early years in Maine, enlisting in the United States Air Force at age 17. While stationed at Clark Air Force Base in Manila, Philippines, he met his wife Olive Angela Threet and they were married 34 days later. During his tenure in the USAF, he served as a driving instructor and head of the motor pool and lived in places as diverse as Germany and Labrador, a post he would later describe as his least favorite. After his military retirement, Carroll�s love of cars and driving led him to his work as a truck driver, both at Uniroyal and other companies. He was an extremely hard worker and while raising his family often held two jobs, instilling in his children the value of hard work. Self-taught, he finished the basement in an early home he and Olive purchased so his children would have more room. He enjoyed camping and fishing with his young family and ever resourceful, refurbished an old bread truck into a modified family camping van. Painting the van kelly green, he painstakingly hand-painted white block letters on its front, affectionately naming it The Jolly Green Giant. He prided himself on a meticulously maintained home and lawn and for many years spent significant amounts of time attending to these details. Carroll retired in 1990 and took up golf. After Olive�s retirement a few years later, they moved to Lady Lake Florida where he golfed to his heart�s content, often rising early to make first tee time before the heat of the day. He moved back to Chicopee in 2001 to be closer to family, celebrating his 50th wedding anniversary with Olive in a 2002 surprise event attended by family and friends. In his later years, Carroll became a master puzzle maker, completing numerous finished pieces that he framed into works of art. Although failing health left him limited in his abilities, he modeled acceptance and grace in the face of his limitations. His children and grandchildren were a delight to him and he shared recently that the accomplishment in his life he was most proud of was his family. Carroll is survived by his wife Olive of 61 years, their seven children Alfred, Daniel, Carey, Karen, Patty, Shirley and Kathy, grandchildren Audra, Alex, DJ, Dana, Michelle, Kimberly, Matthew, Josh, Lauren, Luke, Caitlin, McKenzie, Maria and Elizabeth and great-grandchildren Katherine, Isabel and Chase. Visiting hours will be from 4-7PM on Thursday, Feb. 20, 2014 at Messier Funeral Home, 1944 Northampton St., Holyoke, MA 01040. His funeral will begin on Friday, Feb. 21, 2014 at 9:45AM from the funeral home and be followed by a Liturgy of Christian Burial at 11AM in Blessed Sacrament Church. The Rite of Committal and Burial with military honors will be held in the Chapel of The Massachusetts Veterans� Memorial Cemetery, 1390 Main St., Agawam at 1PM. Memorial donations in Carroll�s name can be made to The Holyoke Soldiers Home, 110 Cherry St., Holyoke, MA 01040. Please visit www.messierfuneralhome.com for more details.

HOLYOKE- Carroll E. Ware, 82, died peacefully on February 13, 2013 at the Holyoke Soldier&#65533;s Home surrounded by his family. Carroll was born in Randolph, Maine on February 26, 1931, the son of Hazel James and Clarence Ware. He lived his... View Obituary & Service Information

The family of Carroll E. Ware created this Life Tributes page to make it easy to share your memories.

Send flowers to the Ware family.