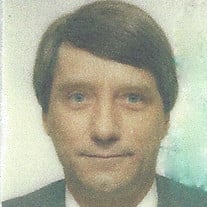 CAMERON M. MCQUAID 1945-2017 HOLYOKE- Cameron MacEachern McQuaid, 72, passed away on November 30, 2017 at the Holyoke Soldier�s Home after a long journey through Alzheimer's disease. Cam�was born in Chicago, Illinois on April 20, 1945. He was the son of�the late Edith (Platzer) Rice, step-father John Rice, and Clarence McQuaid. Cam graduated from Chester High School and then went into the Air Force, where he served in Vietnam. Upon his discharge, he went to college and studied Mathematics and graduated from Embry Riddle Aeronautical University. Living mainly in Fl, NC and MA,�Cam worked for many years as an engineer for several companies, including General Electric, Titeflex, Motorola, and Wyeth, from which he retired. He enjoyed travel, riding motorcycles, rock & roll music, and spending time with his animals, family, and friends. He was a member of the 4H club as a child and later a member of the VFW. He is survived by his wife of over 35 years, Diane (Kinner) McQuaid and his daughter Jesseca Holmes and her husband Timothy. He will also be missed by his sister Christin (McQuaid) and husband Richard Golden. Cam enjoyed and will be missed by his grandchildren Calvin, Cassidy, and Matthew, nieces Julie and husband Greg French and Kathy Darby, his nephew John Golden and wife Laura Lull,�and 6 great nieces and nephews: Tyler and Lauren French, Clint, Nick, and Joanne Darby, and�Eleanor Golden. He was close to his cousins Jeff and wife Deb Platzer, Jim and wife�Janice Platzer, and�their son Christopher. In lieu of flowers, donations can be made to your local ASPCA. For more details visit�www.messierfuneralhome.com.

The family of Cameron MacEachern McQuaid created this Life Tributes page to make it easy to share your memories.

Send flowers to the McQuaid family.