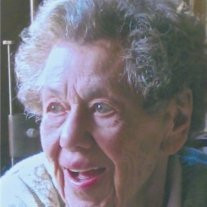 Barbara J. Lippman 1919-2013 HOLYOKE- Barbara J. Lippman, 92, died on Sunday, February 17, 2013 in Holyoke Medical Center. Barbara was born in Milwaukee, WI on October 15, 1919 a daughter of the late John and Louise (Jahns) Messmer. She attended Milwaukee Schools and received her Bachelor�s Degree from Beloit College in 1941, where she was a member of Pi Beta Phi Sorority. Barbara went on to complete her Master�s Degree at Smith College School of Social Work in Northampton. She retired in 1985 as the Director of Social Services at the Holyoke Medical Center, after 25 years of service. Barbara was a member of many Holyoke community groups including the Holyoke Parks and Recreation, Holyoke Jr. League where she was a former President for two years, the former YWCA children�s service as a board member, Friends of the Holyoke Library Committee, Holyoke Canoe Club where she was a member and continued to play tennis until she was 89 years old, and also enjoyed volunteering at Wistariahurst Museum of Holyoke. Barbara was predeceased by her husband George Lippman and her sister Mary Lou Hennessey. She is survived by her son, John Lippman of Camden, ME and her daughter Jeanne Lippman of Wilton, NY. Barbara also leaves two grandchildren, Brandon Boutelle of Lake Placid, NY and Tyler Boutelle of Lake Tahoe, CA and 3 great-grandchildren, Clara Rose, Eleanor Lou, and Isabelle Lou. A memorial service for Barbara will be held at a later date. Memorial contributions may be made in Barbara�s memory to Holyoke Medical Center Oncology Department, 575 Beech St. Holyoke, MA 01040. For additional information please visit messierfuneralhome.com

The family of Barbara J. Lippman created this Life Tributes page to make it easy to share your memories.

Send flowers to the Lippman family.