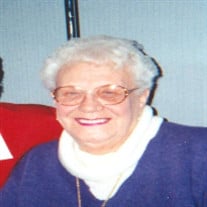 Anna F. Benard 1919 � 2009 Chicopee � Anna F. (Vaitkunas) Benard, 90, of Chicopee, passed away on Good Friday, April 10th at Baystate Medical Center. She was born in Holyoke to the late John and Anna (Ulbic) Vaitkunas. She lived for many years in Willimansett before moving to the Fairview section of Chicopee. Anna was a devoted wife, married to Raymond �Butch� Benard for forty six years before he passed in 1987. He was the love of her life. Family was always the most important part of life for Anna. In her years that she raised her daughters, she was an avid sewer and craft person who excelled in needlepoint, crewel, and knitting. The past several years she knitted scarves and hats for Kate�s Kitchen and homeless shelters. She was a communicant of St. Mary of the Assumption Church in Willimansett. Anna is survived by two daughters Bonnie A. Picard and her husband Jim of Granby, and Jo Ann B. Benard of San Diego, CA. Anna was so fortunate to have four wonderful grandchildren, Jeffrey Picard and his wife Jennifer of Granby, Nicholas R. Pabarcus and his wife Amy of San Diego, Andrea Cameron and her husband Brian of Ludlow, and Tony Pabarcus of San Diego. �Nana� as she was called by everyone, was blessed with seven beautiful great granddaughters; Zoe, Brooke, Abbey, Lauren, Haley, Julianna, and Samantha. Funeral services are Friday, April 17 from the Messier Funeral Home, 1944 Northampton St. (Route 5) Holyoke with a calling hour from 9:30 -10:30am followed by a Liturgy of Christian burial at 11:15am at St. Mary of the Assumption Church. Burial will follow in Notre Dame Cemetery in South Hadley. Memorial contributions may be made to Shriners Hospital for Children, 516 Carew St., Springfield, MA 01104 or the American Diabetes Association, P.O. Box 11454, Alexandria, VA 22312. The family would like to thank Western Mass Elder Care for all their help these past few years which allowed Anna to stay in her home.

The family of Anna F. Benard created this Life Tributes page to make it easy to share your memories.

Send flowers to the Benard family.